In this morning’s roundup of Oscar news ‘n’ notes from around the Web, "Locker" rolls on, "Basterds" keeps campaigning, and the Academy gets kudos for making some good choices

First, apologies to the makers of the terrific, Oscar-nominated animated short “Logorama.” I did an email interview with two of the French directors last week, but the responses from Ludovic Houplain somehow were routed into my spam folder – so I ran the piece with responses from Herve de Crecy, but not Houplain. Now that I’ve found Houplain’s email, I’ve expanded the piece to include both directors’ comments. (TheWrap) 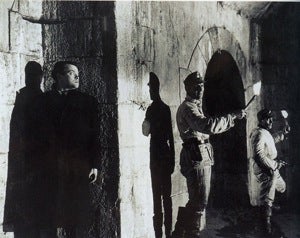 Time Out New York picks the 50 most deserving Oscar winners of all time. In some cases, they seem to be significant rather than completely deserving, but the list (which ranges from the cinematogtraphy of “The Third Man” (left) to the visual effects in “2001: A Space Odyssey” – is a nice reminder that the Academy does get it right a lot of the time. (Time Out New York)

A.O. Scott reviews the Oscar history of Meryl Streep, with 16 nominations but no wins in the past 26 years. Then he decides that his musings on whether she’s been fairly rewarded by the Academy are “really just trivial showbiz math, pseudoscientific data marshaled in support of a conclusion that is already axiomatic: Meryl Streep is the best screen actress in the world.” The article does not mention Sandra Bullock, but it doesn’t have to. (The New York Times)

Anne Thompson looks at the awards events of the weekend – the WGA Awards, BAFTA – and reaches the inevitable conclusion: things are looking very good for “The Hurt Locker.” (Thompson on Hollywood)

The TV rights to the Oscars gives the Academy enough money to fund everything else it does all year round – but what does that “everything else” include? The L.A. Times looks into it with AMPAS president Tom Sherak (who, contrary to what the Times says, is not in the first year of a four-year term, but the first of a potential four one-year terms), and details the film preservation, scientific studies, archiving, educational programs and public exhibitions that make up some of the non-profit organization’s non-Oscar work. Christy Grosz notes that the Academy’s planned museum, which will be located next to its Pickford Center for Motion Picture Study in Hollywood, is on indefinite hold awaiting funding. (Los Angeles Times)

As part of his blitzkrieg aimed at convincing Oscar bloggers (and maybe a few voters) that “Inglourious Basterds” has a chance to win Best Picture, Harvey Weinstein talks to Scott Feinberg about how Quentin Tarantino is due, and how the actors love his movie, and how “Basterds” has less CG than “The Hurt Locker” (I’d really like to see some backup on that), and how QT is “a great goodwill ambassador for the movie industry.” He also says “The Road” and “Nine” are underrated and will grow in stature. I might agree with him on one of the things he’s trying to sell (I liked “The Road”), but not the others. (And the Winner Is … )

On a not-entirely-unrelated front, the Hollywood Reporter tells how Quentin Tarantino stepped in and saved the family-run New Beverly revival house in Los Angeles when it ran into hard times. The saga dates back to 2007, but it’s suddenly being told now. Ain’t that convenient? (Hollywood Reporter)

Addie Moorfoot writes a love-story memoir that’s all tied up with Oscar night, since she met her husband when she was an entertainment journalist and he’d been nominated for a documentary (which later won). If you know recent Oscar-winning feature docs, it’s easy to figure out who’s who. But she doesn’t use last names (or, in some cases, first names), so I won’t spill the beans. (Marie Claire)