In this morning’s roundup of Oscar news ‘n’ notes from around the web, the Academy parties, the Coen Brothers want to sell you a used car, and Oscar fatigue sets in.

The Academy offers an official Oscar Party Kit, full of tips and recipes and assorted ephemera: downloadable ballots, an Oscar crossword puzzle, and my favorite, Oscar Bingo cards, in which viewers try to win by looking for a variety of Oscar night occurrences: “Political Statement,” “Standing Ovation,” “Music Cuts Off Speech,” “Red Dress,” “Winner Kisses Date” … I suppose it wouldn’t be appropriate if they’d added “Teenage Presenter with No Business on the Oscars” and “Gross Miscarriage of Justice.” (AMPAS) 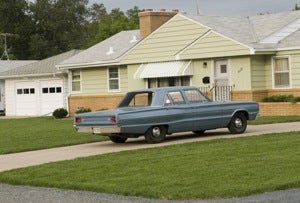 In another Oscar/charity crossover, Focus Features has donated the 1966 Dodge Coronet driven by Michael Stuhlbarg in Best Picture nominee “A Serious Man” for an eBay auction to benefit Variety – the Children’s Charity of Southern California. If you happen to be in Minnesota, you can see the car at the Mall of America until the auction ends on March 4; if not, here’s a photo. The car’s value is estimated to be on the high side of $20,000. (eBay)

Marshall Fine looks at the Oscar race and says … he doesn’t care. Afflicted by serious awards fatigue, Fine thinks the problem is that it’s too late to still care about last year’s movies; his solution is to announce the nominations on January 2 and hold the Oscar show on February 1. But he does summon up enough enthusiasm to make this prediction: “’Inglourious Basterds’ will win. Unless ‘Avatar’ wins. Except if ‘The Hurt Locker’ wins.” (Hollywood and Fine)

“In many ways,” writes Sasha Stone, “2010 may mark the year when the Oscars became relevant again.” Her survey of the races is largely an appreciation of “The Hurt Locker,” though she also delves into the Best Actress race (where she thinks Carey Mulligan still has a chance to pull off an upset). And in the Best Picture race, she insists that “anything could happen.” And by “anything,” she even includes “The Blind Side” winning. (Awards Daily)

Business Pundit prepares (and Kris Tapley points the way toward) a nifty chart of “The Numbers Behind the Academy Awards.” It includes the stats that five percent of Oscar winners die prematurely after winning, 21 percent of winning actors see their careers plummet, and the average person wins $50 in “most Oscar prediction contests.” I have my doubts about some of these stats. (Business Pundit)

Tapley presents a guide to the Best Original Song category, with sound files of all five nominees. His entirely reasonable conclusion: “This category is certain to go T Bone Burnett and Ryan Bingham’s way. ‘The Weary Kind’ from ‘Crazy Heart’ is the epitome of everything this branch wants out of an original song contender ….” (In Contention)

Pete Hammond wonders if “The Hurt Locker” is now a lock to win Best Picture. He decides that it probably is, but he’s not quite ready to call the race over. Those 10 nominees are causing everybody to tiptoe gingerly around calling this one a lock. (Notes on a Season)

Brad Brevet surveys the short film nominees. On the animated side, he thinks that history suggests a win for the Wallace and Gromit film “A Matter of Loaf and Death,” but thinks “Logorama” might pull an upset.  Among the live action nominees, he likes “Miracle Fish” best but thinks “The Door” will win. I think his predictions are probably right, though these can be tough categories to call. (Rope of Silicon)