In today’s roundup of Oscar news ‘n’ notes from around the web, the Oscar producers try to get along and it’s open season on “The Hurt Locker.”

David Poland asks “Avatar” producer Jon Landau about the email from “Hurt Locker” financier Nicolas Chartier that ran afoul of AMPAS campaign regulations by mentioning “Avatar,” though not by name. Landau says he was surprised, adds that it’s all politics, and insists that the race is between 10 movies, not just “Locker” and “Avatar.” (The Hot Blog)

Adam Shankman says he and Oscar co-producer Bill Mechanic are “the original Odd Couple.” (Just wondering: aren’t Felix and Oscar, the characters in Neil Simon’s play, the original Odd Couple, since that’s where the name originated?) The two producers tell Anthony Breznican about their different strengths – Mechanic is maniacal about the “transformative power” of film, and Shankman is all about showmanship – and admit that yes, they’ve had disagreements, including one heated moment caused by a pre-6 a.m. Shankman email. (USA Today) 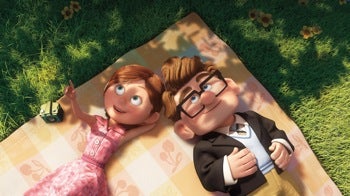 Pete Docter dissects one of the most acclaimed scenes of the year, the montage that sums up a long marriage at the beginning of his Best Picture nominee “Up" (right). The idea, he says, was to convey “the sense of a life lived, and not only the highs, but the lows.” Interesting note: for inspiration, they looked at old home movies of perfect strangers, which composer Michael Giacchino had ordered on eBay. (The Envelope)

Author and film studies professor Martha P. Nochimson poses a question: “Kathryn Bigelow: Feminist pioneer or tough guy in drag?” Turns out that Nochimson wants Bigelow to not make movies full of tough guys. “I don’t begrudge the praise for Bigelow’s depiction of urban war violence,” she says, after doing just that. Also: “Looks to me like she’s masquerading as the baddest boy on the block to win the respect of an industry still so hobbled by gender-specific tunnel vision that it has trouble admiring anything but filmmaking soaked in a reduced notion of masculinity.” But she really likes Nora Ephron (“Julie & Julia”) and Nancy Meyers (“It’s Complicated”). (Salon)

And since it’s apparently open season on “Hurt Locker” week, Kate Hoit says the movie isn’t accurate about uniforms, EOD support, weapons and the like. Then she says it’s better than a lot of the other recent war movies. (The Huffington Post)

Dave Karger and Missy Schwartz pick four Oscar underdogs they’d love to see take home prizes. “True, these four performers don’t have a shot in Hades to reach the Kodak Theatre stage on March 7,” he writes, “but that doesn’t mean they’re not deserving of our love.” Karger’s love goes to the BAFTA winners, Colin Firth in “A Single Man” and Carey Mulligan in “An Education”; her picks are Vera Farmiga in “Up in the Air” and Jeremy Renner in “The Hurt Locker.” (Oscar Watch)

Charles Dennis says that Christopher Plummer deserves an Oscar for “The Last Station,” his first nomination in a career spanning more than 50 years. “Not to take anything away from Waltz’s or the other nominee’s work in that category (Stanley Tucci, Matt Damon, Woody Harrelson), but the history of Oscar is littered with hot choices who triumphed in the moment, often at the expense of more seasoned actors.” He may be right, but for some reason Plummer never picked up any real momentum this awards season. (The Hollywood Reporter)

The Film Experience launches its annual Oscar symposium, in which awards bloggers talk about stuff. First up: their imaginary date for the Oscars, and who they’re rooting for. The “Bright Star” costumes, surprisingly, get the most support from the six panelists, whose dream dates are all over the map from Jeremy Renner (Sasha Stone) to Tina Fey (Tim Robey) to Juliette Lewis (Nathanliel Rogers) to Betty White (Peter Knegt). (The Film Experience)