In this morning’s roundup of Oscar news ‘n’ notes from around the web, “The Cove” goes to Japan and “The Hurt Locker,” to nobody’s surprise, goes to the top of another critics’ roundup.

Variety looks at how the 10 Best Picture nominees have scored with the two top critics aggregation sites, Metacritic and Rotten Tomatoes. If you combine the two scores, “The Hurt Locker” unsurprisingly comes out on top, followed closely by “Up.” “An Education” is next, and the top five is rounded out by “Up in the Air” and “Precious.” “Avatar” finishes sixth, followed by “A Serious Man,” “District 9” and “Inglourious Basterds.” “The Blind Side” finishes last. By a lot. (Variety)

“The Cove” sees a dramatic effect of its Oscar nomination: distribution in Japan, where tentative plans call for an April release. It’s a significant step for the film, which the Japanese government has tried to suppress because of its damning footage of the annual dolphin hunt in the town of Taij, and its indictment of the government for promoting the sale of dolphin meat that it knows to be tainted with unsafe levels of mercury. In the press release announcing the deal, the director of Medallion Media says the Oscar nomination “only serves to reinforce” the film’s importance. (TheWrap) 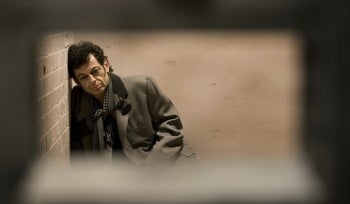 Mark Harris, the author of “Pictures at a Revolution,” journeys to the heart of Oscar Campaign Season. I ran into Mark in L.A. on Golden Globes weekend, when he was dreading the whirlwind of parties and red carpets he’d been asked to attend by his editors at New York magazine. (No pre-booked interviews, they said; he should just grab people at parties and in press lines, in keeping with the spirit of the Oscar circus.) Many parties and awards shows (and many words) later, he’s produced an extensive, entertaining look at the process – which he says, involves “an insane per capita expenditure designed to do nothing more than influence a tiny pool of undecided film-industry voters in a contest that often has only a negligible effect on the box office and a transient one on winners’ reputations. So why bother? Because winning is the only thing in Hollywood other than money that reassures the studios (though almost never the winners themselves) that they did something better than everyone else.” (New York)

The New Yorker notices Oscar, looks at the race between “Avatar” and “The Hurt Locker,” and announces that the preferential system of final best-picture voting might well hurt the former and help the latter. In other words, pretty much exactly what I wrote on January 24. (The New Yorker)

More preferential talk: Mark Lisanti takes my explanation of how the voting process works, and runs with it. The result, I have to say is pretty funny. “At the end of the tabulation process, these two [‘Hurt Locker’] stacks will be combined into a single ‘Holy Crap, I Think This Thing Is Actually Going To Beat Avatar’ pile.” (Movieline)

The Writers Guild of America, East names Alan Zweibel recipient of the Ian McLellan Hunter Award for Lifetime Achievement in Writing. Comedy writer Zweibel is better known for his work in television, where he was an original Saturday Night Live writer and went on to co-create “It’s Garry Shandling’s Show” and write for the likes of “Monk” and “Curb Your Enthusiasm,” than for films, where his work includes “Dragnet,” “North” and “The Story of Us.” for The honor will be handed out on Saturday, February 20 at the Hudson Theatre in New York, concurrently with the Writers Guild of America, West’s awards ceremony at the Hyatt Regency Century Plaza. (WGAE)

The Evening Standard in London hands out its Evening Standard British Film Awards, which may be the most idiosyncratic movie awards around. (That’s what happens when your entire voting body consists of five British film critics.) A couple of the top winners aren’t eligible for Oscars this year, while others cast a bizarrely wide net: “The Hurt Locker” cinematographer was in a category with the film editor of “Sherlock Holmes” and the production designer of “Moon.”  (BBC News) The winners: