In this morning’s roundup of Oscar news ‘n’ notes from around the web, it’s a day for planning the Oscars, predicting the nominees and saluting Miramax Films.

Sandy Cohen reports on preparations for the Oscar show, which Adam Shankman says will feature “the most complicated automated set the Oscars have ever had.” He and co-producer Bill Mechanic also offer that the show will feature “dancing for straight guys” (Shankman’s phrase) and fun presenters, and that it’ll be “funnier, shorter and more inclusive” than past shows. New producers, you know, always say that their Oscar shows are going to be shorter. Their shows never are. (Associated Press via Yahoo! News) 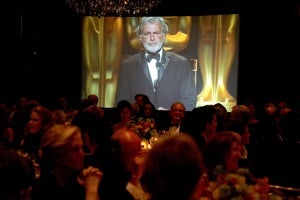 Academy members who live in New York now have a place to go on Oscar night: GILT in the New York Palace hotel, where AMPAS is throwing its annual New York Oscar celebration. The evening, open to members on the east coast, will include cocktails, then a “multi-course Oscar-themed dinner” and viewing party. The Manhattan soiree has been an Academy tradition since 1990. (Academy of Motion Picture Arts and Sciences)
(Photo of 2006 New York Oscar party by Paul Hawthorne/Getty Images)

Richard Roeper predicts the Oscar nominees, after taking a shot at the Academy for not ditching the early-morning announcement in favor of a one-hour special on E!, complete with remote cameras in the homes of potential nominees. He figures “Star Trek” gets a Best Picture nod instead of “District 9,” and Penelope Cruz represents “Nine” with a Supporting Actress nomination. I agree with him on the majority of his picks, but like him I hope that the Academy doesn’t prove to be quite this predictable. (Richard Roeper & the Movies)

A variety of writers salute Miramax on the occasion of its passing:

David Poland: “they brought – along with New Line and Orion and Gramercy/October – the idea of heavy-duty marketing and publicity to smaller films.” (The Hot Blog)

Kris Tapley: “how ironic that, as the latest and greatest in independent cinema looks for distribution and attention in the snowy hills of Sundance, the studio that made the fest in some ways and, indeed, blazed the trail for independent cinema throughout the 1990s, finds itself closing up shop.” (In Contention)

Richard Lawson: “will stand in history as the great drum beater of the modern independent film movement.” (Gawker)

Melena Ryzik: “a haven for boundary-pushing and Oscar-winning films.” (The Carpetbagger)

David Edelstein (in a rare tribute that includes the post-Weinstein brothers Miramax): “You are a symbol of a movement hit hard by a collapsing economy and the rise of ‘event’ pictures that were never a part of your mandate.” (New York)

Josh Tyler: “They changed the game for everyone, and for a brief point in time, they were the center of Hollywood’s universe.” (Cinema Blend)

Chris Hewitt takes an entertaining Monty Pythonesque approach: “what have Miramax ever done for us?” (Empire Online)