In this weekend’s roundup of Oscar news and notes from around the web, online critics nominate and pundits pontificate.

Anne Thompson and Kris Tapley have their first Oscar Talk of 2010, covering issues like the critical and commercial troubles of “Nine” (she’s not convinced that something like “The Messenger” has enough passionate fans to take its place) the frontrunner status of “Avatar” (he thinks it might get a writing nomination, she doubts it) and the films they’re looking forward to in 2010. The point Anne keeps returning to, whether they’re talking about the best-picture chances for “Up” or the best-actress odds for Zoe Saldana’s “Avatar” performance, is that the Academy is wildly biased toward live-action over animation. This makes Kris angry. (In Contention) (Thompson on Hollywood) 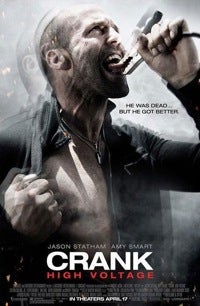 Tired of seeing the same old films on Top 10 lists, Grady Hendrix compiles a list of the “10 great movies you haven’t seen.” “Armored,” “Crank: High Voltage” (left), “Grace,” “Mirageman,” “World’s Greatest Dad” and five others. In my case, his title isn’t quite accurate. I’ve seen one of the 10. And it sucked. (Slate)

Sasha Stone assembles a group of nine Oscar pundits to do what pundits do: pontificate. This time, the topics include Oscar campaigning, Mo’Nique, momentum, and more about the effect of expanding to 10 best-pic nominations. Reponses include one history lesson, a couple of fairly pointed criticisms of Mo’Nique, and one very personal attack on a movie blogger. As one of the pundits in question, I should point out that I’m not responsible for any of those things. (Awards Daily)

Guy Lodge looks at the Oscars’ costume design field and finds the main contenders (“The Young Victoria,” “Nine,” “Inglourious Basterds”) an uninspiring batch. He lobbies for the little-seen “The Brothers Bloom,” and also says nice things about “Bright Star,” “An Education,” “The Imaginarium of Dr. Parnassus” and “Where the Wild Things Are” – the last of which, in spite of what one of his worried readers heard, has indeed been ruled eligible by the Academy. (In Contention)

The Online Film Critics Society releases its nominations. “Inglourious Basterds” has the most nominations, eight, followed by “The Hurt Locker.” Other best-pic nominees are “A Serious Man,” “Up” and “Up in the Air” … but no “Avatar.” “District 9” makes a surprisingly strong showing, with nominations for best director, actor (sorry, Colin Firth and Morgan Freeman), screenplay and editing. Winners should be announced by the end of the week. (Online Film Critics Society)

BEST DOCUMENTARY
“Anvil!: The Story of Anvil”
“The Beaches of Agnes”
”Capitalism: A Love Story”
“The Cove”
"Food, Inc."