In this morning’s roundup of Oscar news and notes from around the web, “District 9” gains momentum, but will that hurt “Avatar”?

Scott Feinberg looks at the career of “Up in the Air” director Jason Reitman, and makes a strong case that the director may be a true auteur who’s been consistently underrated. He also suggests that Reitman is the one person who has the chance to potentially take the best-director Oscar away from James Cameron or Kathryn Bigelow. Funny, I suspect he has a much better chance of being passed over while his film wins best picture – thereby providing Feinberg with further ammunition to make the case that the guy is underrated. (And the Winner Is … )

Dave Karger considers a Producers Guild best-picture lineup that includes three science-fiction films, and wonders if the Oscar best-pic lineup will likewise include “Star Trek” and “District 9” alongside “Avatar.” And if it does, he asks, could that split the sci-fi vote and hurt James Cameron’s chances of reclaiming his crown as King of the World? His guess: “Avatar” will still win if one other sci-fi film makes the cut, but not if they both do. (Oscar Watch) 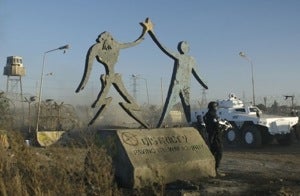 With “The State of the Race: Stumble and Slide,” Sasha Stone brings us up to date and considers the next two crucial nominations, the DGA on Thursday and the WGA next Monday, and the upcoming Golden Globes and Critics Choice Movie Awards. Her focus is “District 9” (left), and whether its sudden strength in screenwriting categories bodes well for its Academy chances. She thinks it does. I hope she’s right. (Awards Daily)

Kris Tapley forecasts the DGA nominations. He thinks the safe prediction would be Kathryn Bigelow, James Cameron, Lee Daniels, Jason Reitman and Quentin Tarantino, but he has a feeling that Daniels is vulnerable. He mulls over the options (Clint Eastwood? Lone Scherfig? J.J. Abrams?) and decides to take a risk with Neill Blomkamp and “District 9.” (In Contention)

Anne Thompson defends “Avatar” against charges that it’s derivative. “Truth to tell,” she writes, “most screenplays are derivative, and this one’s more ‘original’ than all the knock-offs, remakes and sequels everyone makes now.” She also prints an annotated synopsis of “Pocahontas” emphasizing every possible parallel with “Avatar,” down to the fact that both main characters have the initials J.S. (Thompson on Hollywood)