In this morning’s roundup of Oscar news ‘n’ notes from around the web, the Academy staffs its preshow, and a pair of groups salute the best spiritual movies.

The Academy sets three hosts for its official pre-show telecast, “Oscars Red Carpet … 2010,” and books it usual red-carpet greeter.  Not surprisingly, they come from three of the most popular categories from which pre-show hosts are drawn: TV personalities, actresses and journalists. This year, the TV personality is Sherri Shepherd from “The View” (though she also fits in the actress category); the actress is Kathy Ireland; and the journalist is Jess Cagle from Entertainment Weekly. Meanwhile, Hollywood Reporter columnist and official Oscar historian Robert Osborne will be greeting nominees on the red carpet, and conducting interviews for the fans in the bleachers, for the fifth consecutive year.   (AMPAS)

Beliefnet chooses the winners of its film awards, which go to movies with “spiritual and inspirational themes.” Each of the three awards is separated into a Judges Award and a People’s Choice Award. For Best Spiritual Film, “The Road” is tops with the judges and “The Blind Side” with the people; for Best Inspirational Film, the judges make it a tie between “Precious” and “Up,” while the people opt for the former film; and in the Best Spiritual Documentary category, the judges choose “More than a Game” and the people go for “Earth.” (Beliefnet.com) 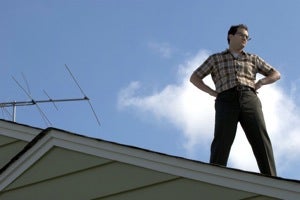 With a far more wide-ranging take on the same arena, the Arts and Faith online community and the journal Image name the “Arts & Faith Top 100 Films,” an intriguing collection of films that explore issues of faith. You won’t find evangelistic recruiting films, Biblical pageants or the like on the list, which is long on foreign films that explore issues that could be considered religious or spiritual. Explains film critic Jeffrey Overstreet, in a blog post accompanying the list: “Many Christians have become so concerned about the usefulness of art as a tool of ministry and evangelism, they’ve forgotten—or never known in the first place—what art really is, and how it works.” The list includes only one current film, the Coen Brothers’ “A Serious Man” (right), along with the recent French film “Summer Hours.” The number one spot is occupied by Carl Theodor Dreyer’s 1955 Danish film “Ordet,” followed by “The Decalogue,” Polish director’s Krzysztof Kieslowski’s series of ten films, each based on one of the ten commandments. Other entries on the list include “The Passion of Joan of Arc,” “The Seventh Seal,” “Wings of Desire,” “The Bicycle Thief,” “Days of Heaven,” “It’s a Wonderful Life,” “Paris, Texas,” “Chariots of Fire,” “Crimes and Misdemeanors” and “The Song of Bernadette.” (Arts & Faith/Image)

Sasha Stone spotlights six races that she says are still too close to call: Best Picture, Original Screenplay, Cinematography, Foreign-Language Film, Documentary Feature and Best Actress. She thinks picture will probably go to “Avatar,” though she’s hoping for “Hurt Locker”; she thinks the actress race is now down to Sandra Bullock vs. Gabourey Sidibe rather than Meryl Streep, and comes close to predicting an upset for Sidibe. (Awards Daily)

Apparently, Jeff Bridges picked the right musical genre. According to the Associated Press, actors who play country musicians have a better track record at winning Oscars than those who portray soul, jazz or pop singers. Country, they say, has a 50 percent success ratio, with Sissy Spacek, Robert Duvall and Reese Witherspoon winning for “Coal Miner’s Daughter,” “Tender Mercies” and “Walk the Line,” while Joaquin Phoenix, Jessica Lange and Ronee Blakley were nominated for “Walk the Line,” “Sweet Dreams” and “Nashville.” Other genres have a spottier record, although Marion Cotillard won for “La Vie en Rose” and Ray Charles took home the prize for playing Ray Charles – who, they point out, did play his share of country songs. (The AP via CBS news)

Well, this is the weirdest (and probably most offensive) opening of an Oscar-related press release I’ve received recently: “The late British fashion designer Alexander McQueen has emerged as the new 9/4 favourite … to dress this year’s Best Actress at the Academy Awards. Leading Oscar nominees Sandra Bullock and Meryl Streep had initially been tipped to don the likes of French fashion house Lanvin, Oscar de la Renta or Alberta Ferretti on the red carpet but McQueen’s untimely and tragic death has catapulted him into prime position to shine at this year’s ceremony.” That news comes courtesy of British bookies Paddy Power, who in less-distasteful oddsmaking have also made “The Hurt Locker” a slight favorite over “Avatar” and made Jeff Bridges, Mo’Nique and Christoph Waltz as prohibitive favorites, particularly Waltz. They also give three-to-one odds against the Best Actor winner crying, eight-to-one against an Oscar being dropped, and 12-to-one against an acting acceptance speech breaking the record for the longest Oscar speech ever. Since nobody’s quite sure how long that was, although it almost certainly came in the days before television (and TelePrompTers, and “PLEASE WRAP UP” signs), that last one seems pretty safe. (Paddy Power)