In today’s roundup of Oscar news ‘n’ notes from around the web, the Academy held an awards show last night. You might have heard about it. Afterwards, people talked.
Anthony Breznican reports from backstage. Quoth Jeff Bridges, “I don’t even know what a thank-you cam is.” (USA Today)
Kerry Lauerman has the story on the weird interruption as the director of the winning Documentary Short made his speech – turns out that he and his producer had a disagreement more than a year ago that resulted in a lawsuit. The two weren’t speaking, even before the mess onstage. (Salon)
Patrick Goldstein wants to know if doubling the number of Best Picture nominees accomplished anything. He thinks not (“There’s really room for only three or four serious best picture contenders in any given year”), but he’d like to see the experiment continue for a couple more years. (The Big Picture) 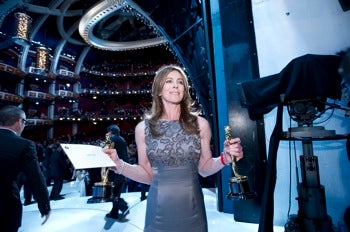 Eugene Hernandez reports on the Malibu Oscar party held for banned “Hurt Locker” producer Nicolas Chartier. “Everyone in this room, keep trying, keep pushing, keep knocking on doors if you believe you have something,” said the financier/producer after winning an Oscar that’ll be given to him at a later date. (indieWIRE)

The Geekiest Oscars Ever? Devin Faraci thinks so. His evidence includes Kathryn Bigelow (director of the geek classic “Near Dark”), Jeff Bridges (because he was in “Tron”), the horror montage, Ben Stiller’s shout-out to Spock ears, and the fact that the “Hurt Locker” editor is part of Grindhouse Releasing, which puts out movies like “The Evil Dead” and “Cannibal Holocaust.” (CHUD)
David Poland weighs in: “For me, the biggest story is that for the second year in a row, a movie that was rejected by the industry and was one believer away from being direct-to-dvd, won Best Picture.” As for the show, he didn’t care for it: “But in the end, the show was never so bold as to challenge the Allan Carr year for Worst Ever consideration. With some minor exceptions, it was by the book, though a bit sluggish.” (The Hot Blog)

More reviews of the show:

Alessandra Stanley, the New York Times: “The Academy Awards ceremony on Sunday night was one enormous Hollywood stimulus package.”
Tom O’Neil, Gold Derby: “The show wasn’t a disaster, but it wasn’t a great Oscars either.”
Mary McNamara, Los Angeles Times: "There were funny and poignant moments, but the evening seemed to drag because of poor pacing."
Sasha Stone, Awards Daily: “it made me yearn for last year’s tight-as-a-drum ceremony that brought back the thing about the Oscars that makes them unique: class and glamour.”
Kris Tapley, In Contention: “an utter disaster in so many ways.”
Heather Havrilesky, Salon: “As crazy as it sounds, this year’s Oscar festivities were dynamic, funny and moved along at a good clip.”
(Photo by Richard Harbaugh/AMPAS)
x
Looks like you're enjoying reading