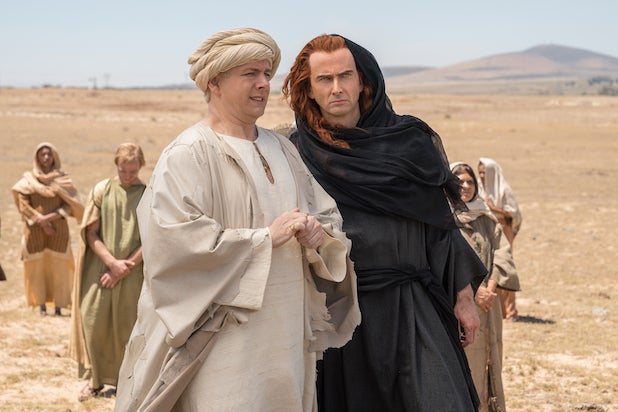 (Warning: This post contains spoilers for “Good Omens” through Episode 3)

The third episode of Amazon’s Prime Video adaptation of Neil Gaiman and the late Terry Pratchett’s “Good Omens” starts off with the longest cold open in the history of television — as far as TheWrap and the stars and creative team behind the series can tell.

“I have no way of measuring that, but there can’t be many that are longer,” director Douglas Mackinnon told TheWrap of the segment, which is comprised of several scenes telling the story of how the demon Crowley (David Tennant) and the angel Aziraphale (Michael Sheen) became friends over millennia on Earth.

Counting from the beginning of the episode until when the title sequence kicks in, the cold open accounts for 28 minutes — half of the episode’s 57-minute runtime.

Also Read: How 'Good Omens' Feels Like Monty Python - and Why Terry Gilliam Gets Credit for the TV Series

Now, we’ve done our due diligence here and cannot find another series that had a cold open which took up more than 50 percent of an episode before an actual title sequence, not just a title card or opening credits over a scene, ran. (If you can, please let us know.)

Mackinnon says the lengthy window without titles wasn’t planned from the start, but kind of just happened serendipitously while they were editing the co-production between BBC and Amazon.

“I was the one who put the title sequence in the middle to start with and we had a screening with Neil and he didn’t say anything about it, so I didn’t say anything about it,” he said. “We sent it over to Amazon for them to have a look at and make a comment on. I think it was a complete understanding, from both the BBC and Amazon execs, that the title sequence in the middle of the show was a temporary thing, and eventually we would see the light and put it at the normal place in the front.”

“Then eventually, we were starting to finish it off and, I cant remember which exec said, ‘So when are you going to move the titles into the right place,’ and we said, ‘They are in the right place,'” Mackinnon said. “To be fair, all the Amazon execs immediately said, ‘OK, that’s cool. That’s just funny.'”

Tennant and Sheen told TheWrap they had as much fun shooting the scenes throughout Crowley and Aziraphale’s history that make up the lengthy segment (which Tennant is for sure calling “the longest cold open in the history of television” and “trying to get that to take off as a meme”) as Mackinnon did with the credits placement.

“It was definitely one of the most enjoyable parts of filming for me,” Sheen said. “First just reading it on the page, it was incredibly satisfying there, and you think, ‘Well, I can’t wait for us to do this.’ And then to see David walking out of the trailer every day with different hairstyles, that was so enjoyable for me.”

Yeah, Tennant and Sheen go through several costume and wig changes over the 28-minute opener to Episode 3, seeing as they are repping their characters from the beginning of time through the present.

“The scenes were sprinkled quite randomly through the shooting schedule,” Tennant said. “Because we had one director, the whole thing was shot by Douglas, and every few days there would be another time period you’d get to visit, and you’d kind of look forward to them, because it was like dressing up. And I think the art department, every corner of production, looked forward to it. We all got to play, whether it was a suit of armor or a strange bit of facial hair.”

“And going inside the Globe Theatre for the Shakespeare!” Sheen added.

The rest of the episode — as you readers who have watched it (and should not be reading this post unless you have), will know — takes place back in the present day, where Aziraphale and Crowley are trying to stop the young Antichrist from ending the world.

Mackinnon said that, “because it’s a such a diversion into that journey through centuries and time, when we rejoin Story A after the front titles, you kind of get the point of why we did that.”