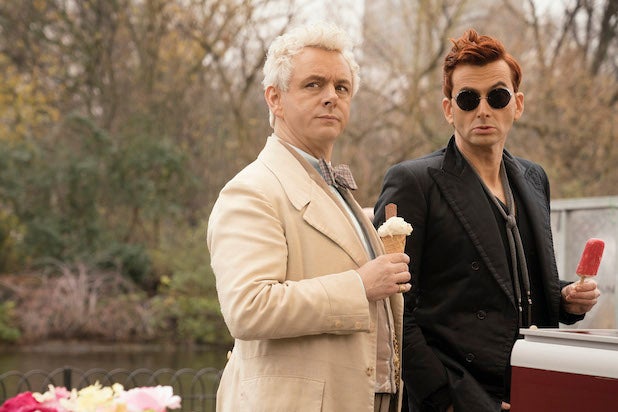 (Warning: This post contains spoilers for the “Good Omens” finale)

The bait-and-switch reveal that Aziraphale (Michael Sheen) and Crowley (David Tennant) were posing as each other during their respective trials in Heaven and Hell during the “Good Omens” finale is a twist that makes perfect sense in hindsight, as the angel and demon have been friends for millennia, and thus learned how to mimic the other to a tee.

But even those viewers paying the closest of attention to the Amazon Prime Video adaptation of Neil Gaiman and the late Terry Pratchett’s beloved fantasy novel might not have picked up on the swap if they hadn’t read the book and knew it was coming, because Sheen and Tennant took such great care to hide the gambit in plan sight.

TheWrap spoke with Sheen and Tennant about how they pulled it off. Here’s what they said.

Michael Sheen: Well, that was the challenge: How do we do it and not give it away obviously, but when someone was to think back or to go back and watch it again, that it would be satisfying to watch?

David Tennant: Luckily, those scenes came relatively far into the shoot, so we’d had many months of being around each other and seeing each other work. Even subconsciously you sort of pick up what the other actor is doing, the little tics that might give it away. So we talked about that a lot, about how much — you have to, as an audience member, not really see it coming, so there’s a bit of sleight of hand as well.

Sheen: Yeah, ’cause from an acting point of view, it’s so tempting to wink at the audience a bit through it, and because it’s so enjoyable to be another character for a while.

Sheen: But ultimately I think the audience would enjoy it much more if they hadn’t seen it [coming, but] in the reveal it’s something they sort of knew in the back of their mind the whole time.

Tennant: Yeah, for the whole big trial in Hell and trial in Heaven, I think we bring it out very subtly and then allow that to come through. I think it will make [“Good Omens”] one of the shows that will reward repeated viewings.

Setting aside just that particular bait-and-switch bit in the finale, Gaiman — who wrote the series himself and acted as showrunner — told TheWrap that seeing Sheen and Tennant act opposite each other “was like watching two people dancing,” which is rather impressive, as the two have never shared the screen in any significant way before.

“Although they’ve known each other for years and they had small parts when young in one film, they had never acted alongside each other because they’re always up for the same parts,” Gaiman told TheWrap. “I loved the fact that I had these two actors. You can never be sure, when you’re mentally casting, whether or not something is going to work, but I was really certain it would.”

And here is how the author’s mental casting went down.

“I had Michael Sheen in mind from the very beginning,” Gaiman said. “Initially I thought of him as a Crowley. It wasn’t until I finished writing all of the scripts that I knew I wanted Michael for Aziraphale. We had a very awkward dinner, Michael and I, because he thought that I was going to ask him to play Crowley, and he didn’t really want to. He didn’t think that he could bring anything to it. And I thought that he was expecting me to ask him to play Crowley, because he’s the sexy one in the shades.

As for Tennant, Gaiman “can tell you the exact moment” when he knew he wanted to cast him as Crowley.

“I was on Episode 3 and I was writing the scene in the church where Crowley has to come down the aisle of the church to rescue Aziraphale,” he said. “And I went, ‘Hang on, if he’s inside the church as a demon he’s gonna be going, ‘Ow! Ow! Ow! Ow!’ and sort of dancing the whole time, like somebody on really hot sand at the beach.’ The moment that occurred to me, I thought, ‘You know, David Tennant could do that. And I’m not sure that I can think of anyone else who could do that.'”

Oh, if you were ever hoping to see Tennant as Aziraphale and Sheen as Crowley, there is still a chance that could happen — if they adapt “Good Omens” for the stage, that is.

“They have been joking from pretty much the first day on set that if we ever do it, a ‘Good Omens’ on the theatrical stage, they want to take it in turns every night, swapping back and forth between Crowley and Aziraphale,” Gaiman said.

All six episodes of “Good Omens” are streaming now on Amazon’s Prime Video.