(Warning: This story contains spoilers for the third episode of Amazon’s “Good Omens.”)

The historically-long cold open of the third episode of “Good Omens” shows just how often the angel Aziraphale (Michael Sheen) and demon Crowley (David Tennant) influenced events over their millennia of friendship. The two would meet in secret over their centuries of friendship, with one one of the most surprising get-togethers coming during one of William Shakespeare’s most famous plays.

Except that the debut of “Hamlet” didn’t go well as we all thought: It was a flop, because as Crowley put it, it’s one of the famed playwrights’ “gloomy ones.” It only ends up being successful because Crowley — doing Aziraphale’s work for him — performs a “miracle” to get people to show up. The scene wasn’t initially supposed to go like that, however, explains Neil Gaiman, who served as showrunner and co-wrote the novel “Good Omens” is based on.

“The original scene in The Globe, I didn’t have Shakespeare in it, didn’t really have that punchline or anything,” Gaiman tells TheWrap. But there was one problem: The scene was pushing them way over budget. And Complicating matters even further was they filmed the scene in the actual Globe Theatre in London, the first time the theatre was ever used to film a fictional scene. Gaiman and director Douglas Mackinnon only had a small window to film the scene.

“They could only give us five hours one morning, total,” added Mackinnon. Gaiman explained that they would’ve needed “600 extras” to fill the theatre and had to look after them.

“Even if we could afford the crowd, I don’t think we could’ve gotten them in and out in that time and filmed them,” said Mackinnon. So Gaiman rewrote the scene to do it with nobody in the crowd. 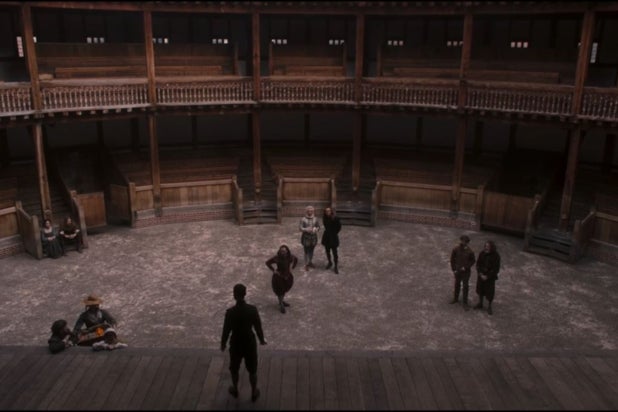 “I thought about it for all of a second and there I said, ‘OK, would you like a rehearsal or a flop?’ and Douglass said ‘I would like a flop,'” said Gaiman, which is then when he decided to add an actor to play Shakespeare (Reece Shearsmith). “So I just sat down and wrote the scene going OK it needs to be a flop. That was how that scene happened.”

Added Mackinnon: “In the spirit of good film-making, we turned a disaster into an opportunity.”

The scene, like all of the others in the near-30 minute long cold open, was not from the book (save for a few brief footnotes). “What I discovered in writing that sequence is you could pick any time in human history, you can take Crowley and Aziraphale, you can stick them into it — not doing whatever their respective head office thinks they’re doing — and you have a story,” said Gaiman.