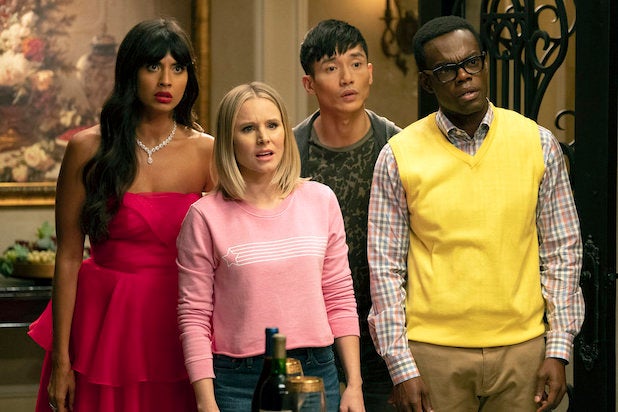 Yes, this is the Good Place, motherforkers.

TheWrap spoke with Schur Thursday — after “The Good Place” received its nod for Best Television Series – Musical or Comedy and star Kristen Bell was nominated for best performance in her leading lady category — and he honestly has no idea what the show did to finally get out of the Hollywood Foreign Press Association’s Bad Place.

“Boy, if I had even the slightest inkling about why any organization votes the way they do any year, positively or negatively, I feel like I’d be — I mean I wouldn’t be doing this, I’d be just placing wagers in Vegas on various things,” Schur told TheWrap. “Like, I don’t know if there is a way you can game plan or a way you can track what you made and what was given to you, or why it hit, or why it didn’t hit. I think it’s a little of, like, we’ve been around? (laughs) We’ve now aired 35 or something episodes so it’s not brand new.”

“Our show runs on NBC, it runs on Netflix afterward,” Schur added. “In the world that we’re in now, I feel like people are just watching everything at different times and I think people are becoming aware of different shows at different times. And for whatever reason, at this moment, it seems people have caught up and they seem to like it and so they voted for it. That’s a very longwinded, boring way of saying, ‘I have no idea.'”

Schur says everyone from “The Good Place” is thrilled over Bell’s nom, but it does sting that lead actor Ted Danson (who was nominated for — and missed out on — an Emmy this year) didn’t get an HFPA nod, too: “You try to be sort of zen about these things. Of course, I think Ted is a miracle of human engineering. I think he should be nominated for — and receive — every award that exists, and appeal that. But also, I feel the same way about Kristen! So it was an incredible surprise and it made us all feel incredibly happy and gooey that they nominated her.”

We then asked Schur to create an awards show-themed “Bad Place” on the spot and this is what he came up with:

“Here’s the reality, in terms of the actual details of these things. Women have it 150,000 times worse than men — and that may be a conservative estimate. I can get ready to go to this event in about 20 minutes. I will take a shower, I will shave and I will put on the same boring black thing that I wear to every one of these things. Women, it is a waking nightmare. I wish always for my wife’s sake, and for all women’s sake, that the rules were: Black tie for men; women, wear whatever you want. (laughs) I think that should be the rule. You know, some women really love getting made up and spending all that time in hair and makeup and wearing fancy dresses, and that’s great and they should do that. But I always wish for my wife’s sake she could wear jeans and a T-shirt if she wants to wear jeans and a T-shirt.”

“It’s such a raw deal. It’s not by far the rawest deal that women face in modern society, it’s probably not in the top thousand things. But it’s up there. And it always bums me out. So I think the ‘Bad Place’ version of it is a women-only version of it, frankly. Because there is nothing quite that bad about it for men.”

Also Read: Golden Globes' 10 Most Ludicrous Comedy or Musical Picks, From 'Get Out' to 'Green Book' (Photos)

In all seriousness, Schur says the dark side of awards shows really is “getting too intense about it in any direction.”

“I think if you get too intense about it, you are running the risk of it ruining your life — or at least your day. So that’s what I try to avoid (laughs).”

The Season 3 fall finale of “The Good Place” airs tonight, Thursday, at 8:30/7:30c on NBC. Check back with TheWrap then for a post-mortem interview with Schur about the episode.