The Hallmark Channel made history with the series finale of “Good Witch” on Sunday, an episode that featured the first kiss between an LGBTQ couple on one of the cable channel’s original series.

The smooch in question was shared by Joy (Kat Barrell) and Zoey (Kyana Teresa), who have also been representing as the first LGBTQ couple in a Hallmark show throughout the “Good Witch” run.

Prior to Joy and Zoey’s big finale moment, the only other same-sex kiss to occur on Hallmark Channel’s original programming was in the holiday movie “The Christmas House,” a 2020 film that featured Jonathan Bennett and Brad Harder as a gay married couple who lock lips during the movie.

But as “The Christmas House” is a movie and the “Good Witch” is a series, the Catherine Bell and James Denton-led show has the title of first Hallmark Channel original series to depict an LGBTQ couple kissing.

Hallmark Channel and its parent company Crown Media Family Networks have been making strides in LGBTQ programming in recent years following backlash to both the lack of representation in its holiday movies and original series, as well as its controversial decision to pull a commercial featuring a kiss between two brides in December 2019, a move that was later reversed and an apology was issued.

Since then, the cable channel has promised to increase its inclusion of LGBTQ couples in its content, beginning with the storyline in “The Christmas House” last holiday season. 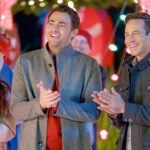 “Good Witch” first premiered in 2008 as a movie, aptly titled “The Good Witch,” and led to seven sequels. In 2015, Hallmark turned it into an episodic series that ran for seven seasons. Earlier this month, Hallmark Channel announced the show’s seventh season finale would serve as its series finale as well.

See the Joy-Zoey kissin the “Good Witch” series finale below.