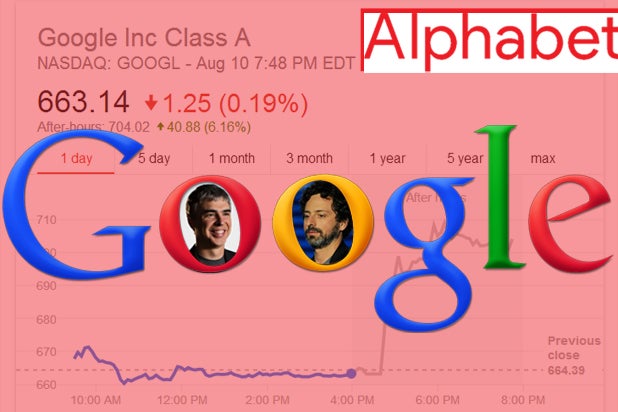 Following Google’s announced restructuring on Monday, company shares traded up over 6.5 percent to as high as $710.80 in after-hours trading.

In a statement after markets closed, CEO and co-founder Larry Page said the company would split its operations into a holding company, Alphabet Inc.

Under the arrangement, the main web operations — including the search engine, YouTube and Android mobile services — will be be run as a subsidiary called Google and led by Sundar Pichai. But the company’s non-Internet units, including health, research and investment divisions, will fall directly under the parent company Alphabet, with Page as CEO and Sergei Brin as president.

“I am just still trying to digest it,” Kirpatrick said in an early response to the news. “It does take some explaining — what their ecosystem is — but ultimately most things they’ve been doing have really been trying to drive you back ultimately to their service to see more advertising. [Google] Maps would be said to be one of those.

“On the other hand, the new stuff — like the car, the life-extension products — those don’t do that, so maybe there really is a logic for the holding company model,” Kirkpatrick said on “Bloomberg West.”

“It makes total sense,” added James Cakmak of Monness, Crespi, Hardt & Co. “They’ve been telegraphing that Sundar would be taking a bigger and bigger role … Having a guy like Sundar come on board, very operationally focused, product focused and removing that from the the ‘moonshots,’ I think, is certainly a good thing.”

Google posted its notice on the new Alphabet site at abc.xyz.

Within the announcement, Google included a hidden link to a promotional site for HooliXYZ — the “Dreamer” division of a fictional company in HBO series “Silicon Valley.”