Ads featuring bitcoin and other cryptocurrencies will soon be banned from Google, the internet’s biggest ad network.

The tech giant announced on Tuesday it is updating its ad policy to block promotions from cryptocurrency exchanges, digital “wallets” used to store cryptocurrency, and firms offering trading advice. Ads for initial coin offerings — the crypto equivalent of a company publicly listing its stock — will also be axed. The changes will go into effect in June.

The ban will also apply to ads on YouTube, its video behemoth, and third-party sites where Google sells ad space. Google’s decision comes on the heels of Facebook adopting similar measures in January — effectively shuttering cryptocurrency ads on the internet’s ad duopoly. Facebook and Google combine to rake in 85 percent of all new internet ad dollars.

At the same time, regulators have been looking to tighten their grips on the nascent cryptocurrency market. The U.S. Securities and Exchange Commission reiterated last week that exchanges “must” register with the agency. Major U.S. exchanges like Coinbase and Gemini aren’t registered with the SEC, but have individual agreements with states allowing them to operate.

Coinbase declined to comment on Google’s decision to TheWrap.

ICOs, which became increasingly popular as bitcoin and other cryptocurrencies rapidly increased in value in 2017, are also facing regulatory scrutiny. New coins have been routinely touted on Twitter, including by eccentric software businessman John McAfee, who often shared his “coin of the day.” As the bitcoin frenzy took off, concerns over con artists launching bogus coins followed suit.

Coin Of The Day: pic.twitter.com/WSTXaha1Nk

Also Read: 50 Cent Admits He Isn't a Bitcoin Millionaire After All

Bitcoin, the grandaddy cryptocurrency, was hit hard on Wednesday, dropping about 9 percent to $8,300 per coin. 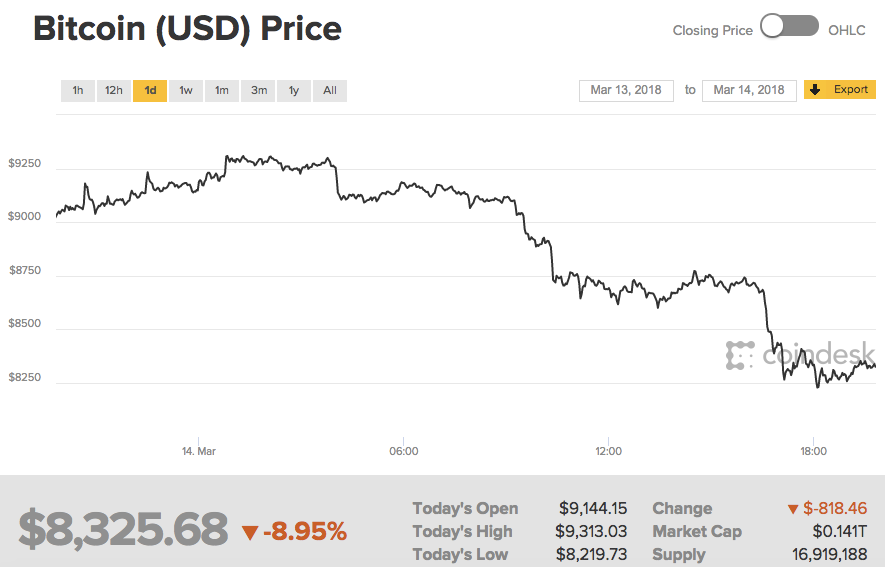 Bitcoin dropped about 9 percent on Wednesday (via Coindesk)

And if you’re still catching up on the whole cryptocurrency thing, John Oliver devoted a segment to explaining the craze on Sunday.