The digital advertising world is still dominated by two companies: Google and Facebook.

That much is clear after both tech giants reported fourth quarter earnings in the last week, providing a full look at their 2018 ad sales in the process. And the results from “the duopoly,” as the two firms have been dubbed, were staggering.

Google’s strength was even more apparent, with the company pulling in $116.3 billion in ad revenue last year. That accounted for more than 40 percent of worldwide online ad sales, according to estimates provided by eMarketer. 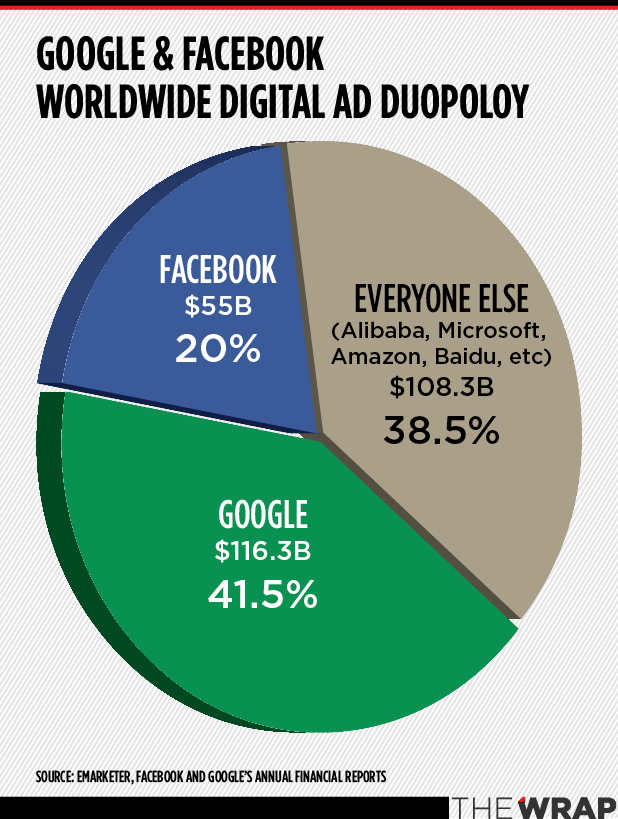 The remaining 39 percent was split among a number of big name companies that are otherwise dwarfed by Facebook and Google — Chinese players Alibaba, Tencent and Baidu as well as U.S. heavyweights such as Amazon and Microsoft.

Most jarringly, the duopoly’s dominance is only expected to grow. By 2022, when digital ads are expected to grab half of all marketing dollars, Facebook and Google’s slice of the pie will increase to 80 percent of the global ad market, according to Polar’s State of Digital Media report.

To get there, Facebook is continuing to find ways to wedge ads onto Instagram, its popular pictures and messaging app, and looking to grow Watch, its content hub on Facebook, to keep eyeballs on its platform longer.

Google, meanwhile, has recently looked to make YouTube, the web’s leading video site, even more advertiser-friendly. YouTube last year banned 1.67 million channels, with more than 50 million videos combined between them, for violations of its anti-spam policy, and last month said it would reduce the amount of conspiracy-oriented videos its algorithm recommends.

The decision came a week after AT&T decided to return to advertising on YouTube after a two-year moratorium, believing its ads wouldn’t be connected to “objectionable content” under YouTube’s latest content policies.