Will this be the iPhone-killer?

Just in time for the Consumer Electronics Show, Google unveiled its hotly anticipated Android-based mobile phone, the Nexus One, to a gathering of journalists and bloggers at the company’s headquarters in Mountain View, California on Tuesday morning. 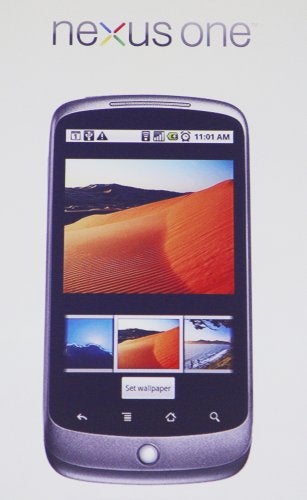 But unlike Apple announcements, this one didn’t come swathed in Kremlin-like secrecy. Google employees had been given phones to try out three weeks ago and the name of the company’s newest entrant into the mobile phone sweepstakes had been widely known.

Still the company took the wrapping off the mobile device to clue techies in on its sexier features – some of which will likely send gasps through the blogosphere that will still be resounding throughout the Las Vegas Strip when CES kicks off on Thursday.

– It will set customers back $500, or $179 with a two-year T-Mobile contract. Google’s web store will allow users to purchase the  phone either without operator coverage or through T-Mobile. The company expects to add more operators in the future, including Verizon Wireless in the U.S..

– Slightly smaller and lighter than the iPhone, it’s 11.5 millimeters thick and weighs 130 grams, or as a reporter from CNET put it, "that’s about as thick as a pencil and weighs as much as a small Swiss Army knife." It has a 3.7-inch AMOLED (active-matrix organic light-emitting diode) display, uses a Qualcomm’s Snapdragon chipset running at 1GHz, and boasts such nifty features as a voice-enabled keyboard and a 3D photo gallery.

– It runs on Android 2.1, the latest version of the operating system that Google helped develop.

– It also comes equipped with such applications as Gmail, Google Voice and Google Maps. In addition to a 5-megapixel camera with a flash and video, it allows users to make one-click uploads of videos they shoot to YouTube.

– In something of an aesthetic innovation, it’s equipped with live wallpaper, meaning the images that sit behind widgets are animated and move when a user touches the screen.

– Unlike the iPhone, users can purchase apps from any vendor. Google executives made a point of stressing this difference during their hour-long presentation.