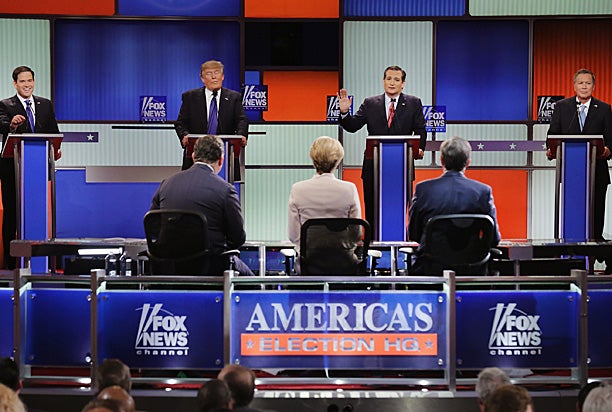 The GOP debate on Fox News featured beef over everything from hand size, Howard Stern and Buffalo Wild Wings to some real issues, as the presidential candidates gathered in Detroit, Michigan, for another must-see TV shouting match.

The tension was high from the start, with viewers waiting for Donald Trump and co-moderator Megyn Kelly to face off. We all know the background: At their last meeting, Trump didn’t like a question, Roger Ailes defended Kelly and Trump skipped the most recent debate hosted by the network.

But Trump has other fish to fry these days.

The GOP frontrunner is under attack from Mitt Romney, and still has three opponents on the stage to deal with. Will Marco Rubio keep it personal? Will Ted Cruz get fired up? What were the best fights? TheWrap has you covered.

Trump defends Rubio’s recent attacks on … his hands
The night kicked off with one of the most bizarre fights in debate history, with Donald Trump referencing his private parts.

It all started after Rubio was asked about his recent personal attacks against the Republican presidential frontrunner, specifically his insinuation that Trump has small hands.

“If there’s anyone who deserves to be attacked that way, it’s Donald Trump for the way he’s treated people in this campaign,” Rubio said.

“No one has ever hit my hands,” Trump said holding up both his hands. “Look at those hands. Are those small hands?”

And just to be sure, he added, “He referred to my hands, if they’re small something else must be small. I guarantee you there’s no problem, I guarantee.”

Trump plays the Howard Stern Card
Trump took a subtle jab at Kelly when he said Howard Stern is “a great friend of mine, and yours.”

The novice Kelly viewers might not have caught this, but the calculated Trump knows exactly what he’s doing. Kelly famously went on Stern’s radio show several years ago and revealed intimate details of her relationship with her husband. Media connoisseurs picked up this comment across social media as it was clearly a small-but-meaningful shot at “The Kelly File” host.

Kelly has since risen to fame and wouldn’t even think about conducting such an interview these days.  Nonetheless, Kelly went on Stern’s show and is now moderating a GOP debate, so it obviously didn’t stunt her career. This is actually something Trump and Kelly havlly for a second.

Little Marco
The brief ceasefire on personal attacks quickly disintegrated when Marco Rubio and Donald Trump sparred over the economy.

“This little guy has lied so much about my record,” Trump said after Rubio launched an attack on some of his failed business ventures.

“He has spent his career convincing people he is something he is not,” the Florida senator said. He then called on Trump to manufacture all his clothing in the U.S.

Trump said China and other Asian countries “devalue their currencies and they make it impossible for clothing makers in this country.”

Rubio responded that the real reason Trump makes some of his products overseas is simply because of profit.

“He doesn’t have answers,” Rubio said.

“Don’t worry about it little Marco,” Trump shot back.

Yoga party!
“You know Donald has a tenuous relationship with the truth,” Cruz said at one point, which drew a chuckle from the crowd.

Trump interrupted, to which Cruz replied: “Donald please, I know it’s hard. But Try. Breathe. Breathe. You can do it. Breathe.

Rubio then chimed in with the zinger of the night: “When they’re done with the Yoga, can I answer a question?”

“I really hope we don’t see yoga on this stage,” Cruz answered seriously.

Cruz managed to keep a straight face and rifle off names of conservative Supreme Court Justices.

She then cited a class action suit of 5,000 plaintiffs involving veterans, teachers and “so-caled little guys” who say that they were “fleeced.”

Kelly then hit Trump again, saying that Trump countersued the lead plaintiff in the class action, and read a damaging comment from the court of appeals in the case: “The plaintiffs against you are like the Madoff victims …”

As Amy Poehler’s iconic NBC character tries to tie a bow on her political career on Tuesday’s finale, we look back at the path she took to get here

Leslie Knope got her start in politics as the deputy director of the Pawnee Parks & Recreation Department, serving under the vehemently anti-government Ron Swanson.