Kate Gosselin appears to be at it again.

Gosselin reportedly is at odds with her "Dancing With the Stars" partner, pro dancer Tony Dovolani, with the pair bickering on camera and Dovolani proclaiming during rehearsals, "I quit." 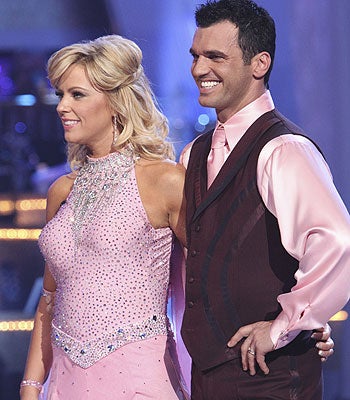 He did appear with her on the live show, however, insisting that he’d overreacted — though published reports are claiming the sparring got worse after the show Monday, with the oft-filmed mother of eight demanding that her partner be fired from the show.

According to Nielsen overnight figures, the show declined 11 percent from its record high a week earlier, drawing 22.5 million viewers — though it was still which was still Monday night’s highest rated offering.

As for the published reports of a rift between Gosselin and Dovolani, “Everyone involved in the show thinks Kate is impossible,” Pop Eater quoted one show insider as saying.

“We all feel very sorry that poor Tony got paired up with her. She talks to him as if he is her ninth child … Everyone would rather get rid of her than Tony, who is loved by all the staff.”