The first season of HBO Max’s “Gossip Girl” reboot concluded with the launch of its final three episodes Thursday, including the jaw-dropping finale that sees Gossip Girl’s biggest Season 1 victim, Julien Calloway (Jordan Alexander) strike up a deal with the anonymous (to her) social media overlord.

Julien DM-ed Gossip Girl (who viewers know to be Kate played by Tavi Gevinson, now that she’s regained control of the account) on New Year’s Eve to tell her that her idea to expose the secrets of her, her sister Zoya (Whitney Peak), her ex Obie (Eli Brown), her best friend Audrey (Emily Alyn Lind) and more Upper East Side youth wasn’t wrong. Julien says she sees the benefit of it now, even though her own life was thrown into chaos by Gossip Girl revealing her father Davis’s (Luke Kirby) sexual misconduct, and that the mistake Gossip Girl actually made was not going hard enough. So Julien promises to spill everything to Gossip Girl on two conditions: One being that Gossip Girl won’t know which tips from Julien are fact and which are fiction, and the other being that Julien will be actively working to take Gossip Girl down and protect her friends as she’s feeding her this info.

Gossip Girl/Kate, agrees, but says she has one condition of her own — however we don’t find out what that is before she sends out a blast that makes it clear she’s committed to this secret alliance with Julien. 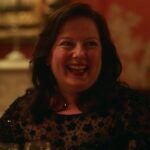 “I can’t tell you about the condition. You’re going to have to watch Season 2 for that. But what I can say is, the arc of this season is such that Julien has come around to Kate’s mission without knowing that it’s Kate,” HBO Max’s “Gossip Girl” creator Joshua Safran tells TheWrap. “Meaning, she has realized that Gossip Girl actually has helped. All these things are out in the open, people are talking. It’s like, the mission statement of Gossip Girl has now infected Julien, and she thinks, ‘The reason it didn’t fully work is because you didn’t do it well enough, and I’m going to help you.’ And I think this alliance between them moving forward is pretty fun and it gives a really great boost of energy for the beginning of Season 2. I wish Season 2 could air right away (laughs). I don’t know how long it’s going to be between seasons, because we haven’t even started shooting yet. But it’s a direct pick up, it’s like a week later. You really seeing what’s going to happen and it’s going to be super fun.”

In the scene where Kate agreed to Julien’s proposal to Gossip Girl, the teacher was researching Camille De Haan (Amanda Warren), the mother of Monet (Savannah Smith), whom she met earlier in the episode while doing a task for her for extra cash.

Kate received a talking to from Camille, who doesn’t know she’s Gossip Girl, but does know she and the other Constance-St. Jude’s teachers have been sending in tips to Gossip Girl, following Kate’s decision for the Gossip Girl account to release all the tips it’s received and who they came from in the episode before the finale. 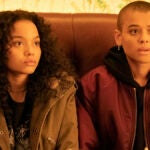 “Camille, you hate her, but it’s funny, a lot of people side with her,” Safran said. “Like, her point of view is true, right? I mean, she doesn’t know that Kate’s Gossip Girl, but she saw that Kate sent in tips to Gossip Girl, Jordan sent in tips. Like, these teachers are reporting on these students. As a mother, I can understand being like, ‘You’re not protecting my children like you’re supposed to.'”

So does Kate’s time spent Googling Camille mean she’s got an ax to grind next season?

“Yes, she definitely does,” Safran said. “You’ll see a lot more of Camille. You’ll also meet Monet’s dad, Greyson, and that is a big story moving forward because Camille sort of represents that Kate is slowly catching on to the same thing that I caught on to, or the writers from the first version, which is that you can want to control and help these kids be better, but the reality is, it’s actually not their fault, maybe it’s their parents fault. I think that’s the beginning of a journey for Kate in that way.” 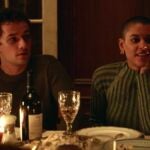 He added: “And seeing her and Kate go head to head is just real fun. And you’re going to see more of that, is what I can say.”

Back to the release of the Gossip Girl tip info, which came at the very end of Episode 11, not as much fallout came from that in the finale as you will end up seeing when the second season of “Gossip Girl” launches.

The really fun part is, it’s actually more of a Season 2 story, because in Episode 12, you see how that lands on everybody. But moving forward, can there be a Gossip Girl if you’re always afraid that you aren’t anonymous when you submit? And that’s sort of like a story that we’re looking at for the future.”

What else should you expect in “Gossip Girl” Season 2? Well, if you enjoyed the very special cameos in Episode 10, you’ll be very happy with Safran’s answer: “Of course, Season 2 will have more returning cast members from the original and just very dramatic storytelling and a lot of great twists and turns. The writers’ room is almost done.”

And last but not least, TheWrap got scoop on the future of everyone’s favorite newly formed triad: Audrey, Max (Thomas Doherty) and Akie (Evan Mock).

You can read more from TheWrap’s interview with Safran here.