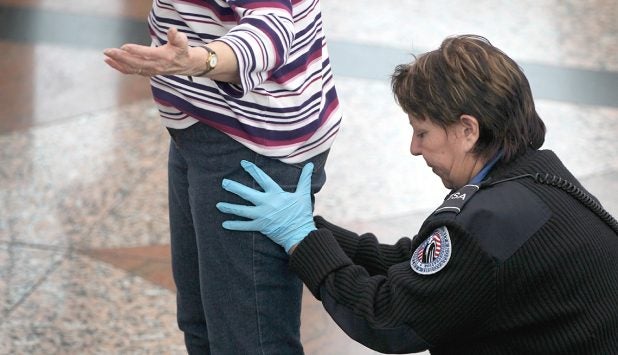 I lost the lottery on Sunday. Time after time I have watched in seething anger as the Transportation Security Administration felt up a hapless traveler at security. I have complained about it numerous times at airports, usually getting into a useless argument with a supervisor that stopped short of arrest.

The TSA feel-you-up pat-down is humiliating. It is invasive. It is government overreach and it should be illegal.

For those who haven’t experienced or witnessed it, here’s the deal: The TSA agent touches every part of your body, in public. You can request a screening in private, but in my case that would not have lessened the injury to my sense of personal dignity. It is a procedure you’d expect upon being booked to go to jail, not to take a routine flight.

On Sunday I misplaced my driver’s license so in order to be permitted to go through security, I had to submit to the enhanced pat-down. Mind you, I had already had my belongings carefully searched. I had already removed my jacket, shoes and scarf. I had already gone through the TSA scanner and had an agent rub my bare wrist, to check that my wristwatch was just that, and felt my ankles carefully for reasons I don’t know.

But after all that, I also experienced the enhanced search, which required the agent to slowly examine every inch of my body. (Because, you know, I had an expired drivers license.)

The female agent placed both hands around my legs and slowly — very slowly — rubbed up and down. The touching went all the way up to my groin. My private parts were touched by the edge of her hand, twice.

She ordered me to turn around and placed both her hands on my chest. She left them there for a few seconds. (What is she looking for, I wonder, if you’re wearing a t-shirt, as I was?) She continued by rubbing her hands along the side of my breasts and using the back of her hands to feel the front of my breasts and underneath them.

I let her do it because I wanted to catch my flight, but throughout I said to her, “I object.”

By the time she was done, I was close to tears (according to the above video, I’m not alone). The TSA screening felt like nothing less than physical assault. If anyone other than a government officer had done anything of the kind, I would have reported it as a crime.

Getting an explanatory speech ahead of this invasive pat-down did little to alleviate the sense of humiliation at being publicly touched in private places.

In this case, the TSA agent got increasingly flustered as her speech went on and I informed her in advance that I objected but would submit. When she asked if I had any particular “sensitivity” in any area of my body — part of her required speech — I told her that yes, my “groin” and “buttocks” were particularly sensitive.

She stopped, and called a supervisor. I was making her “uncomfortable,” she said. Ha! Now I had two men watching the feel-me-up — to which I so objected.

I’ve been arguing with the TSA about this for about a year, although apparently the patdowns have gotten still more invasive under Trump, starting in March. In Chicago, I objected to an elderly Sikh woman being patted down through her sari in excruciating detail. No grandmother should have to endure that humiliation. It was so upsetting that I felt obligated to apologize to the non-English-speaking woman on behalf of the United States. (Yes, I know that sounds weird.)

Then last year in a tiny Aspen airport I objected as the woman right behind me was randomly chosen for the special screening. The woman was wearing nothing more than jeans and a sleeveless t-shirt on a hot summer day, but it took the agent several agonizing minutes to feel up every part of her body. Other witnesses shouted their agreement with my objection.

There must be a better way. The government should not be humiliating law-abiding citizens at our airports on a regular basis. We need to be able to adopt safety measures that do not undermine our personal dignity. I would love to see Vice President Mike Pence, who is so attentive to his wife, observe her subjected to this procedure.

It doesn’t take a genius to figure out that technology can probably find a better way to screen travelers. And I wonder if these invasive screening tactics have ever turned up a weapon that was missed in those fancy machines that our tax dollars pay for.

Has anyone out there experienced this? I’d love to hear from others.

For decades, Israel has had some of the strictest standards for security in its air travel. There is no equivalent in Israel (or Europe) of the U.S. government’s screenings that involve slow touching of a person’s private parts.

I doubt our current president has flown commercial in decades, so there’s little chance he gives a damn about this issue. This procedure started under President Obama, as far as I can tell. But I hope someone decent at the TSA is listening. Humiliating citizens in the name of security is not right. It’s just not right.