Shane West makes his debut as Eduardo Dorrance on next week’s episode of “Gotham.” The character — who will turn into Batman’s nemesis Bane in due time — returns to the city after years away to help Jim Gordon (Ben McKenzie) restore order to the city and reclaim No Man’s Land.

But before viewers of the Dark Knight prequel series even see West step on screen for the show’s fifth and final season, we know they’ve already gotten a look at his Bane suit, thanks to some official — and unofficial — photos and footage.

Here’s the first look photo that came out back in October: 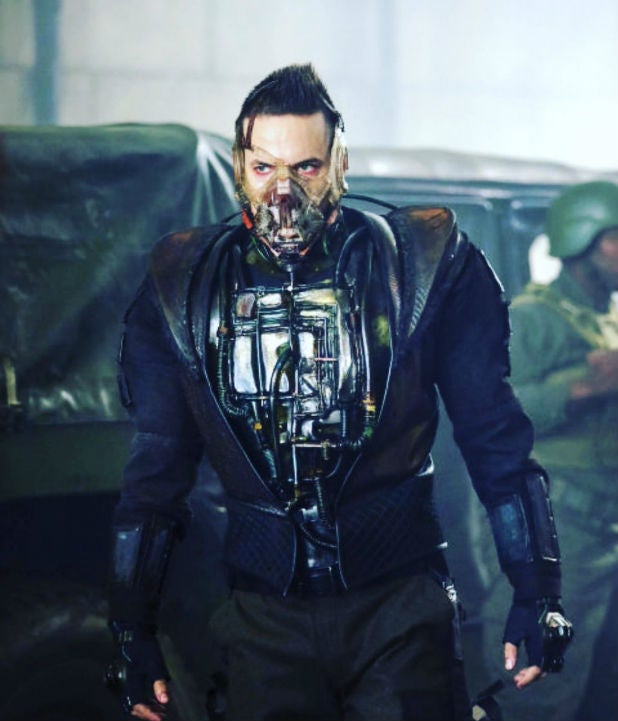 And while not everyone is a fan of the Fox drama’s chosen look for the character, West tells TheWrap he is.

“I loved the costume,” West told TheWrap in the interview above. “For me, we had a whole different thing, because I was out there for two-and-a-half months doing the build and it took a long time to put that costume together. But the point of the costume always, which is apparently the point of what they do for all of their heroes and villains on the show — which I wasn’t aware of — they build here,” he said, framing his upper body with his hands.

“They do kind of like in a comic book, artistic sense they build everything for the face, for the chest and the abdomen and the arms and the head and that’s kind of it, because they kind of fade out and they’re expecting things to film — angles, colors,” he added. “So things have to be filmed correctly when things are coming out.”

West says he was disappointed with how the first photos of him in costume as Bane got out, thanks to paparazzi snapping pictures in broad daylight while they were shooting the Fox drama in New York.

“And you’re just coming out there — I had like six-inch heels on the boots that they added — and you just walk out there and they’re waiting and they’re just snapping godawful photos,” he said. “The joke was, at least let me pose. Or at least come in for a real one rather than me just sitting here and looking like this monster that’s going to fall over.”

“Some of the photos are better than others. And then, I think once you see it on film- and now that I finally have, I’m very happy with it the way it was filmed, the way it was shot,” he said.

In particular, West says he’s a “big fan” of the mask and notes “there were some people that didn’t like Tom Hardy’s look in the [‘The Dark Knight Rises’], even though I think that he looked amazing.”

Speaking of Hardy, we asked West if he’s going to be speaking like Hardy on “Gotham” — seeing as the voice Hardy used for Bane in the Christopher Nolan film is either very popular with Batman fans — or very unpopular.

“They liked my voice already, of just how it’s naturally husky in that sense,” West said. “I wanted to add whatever I had for that, a little bit of Hardy, a little bit of his singsong, like, his up and down. The fluctuation of his voice, I liked — whether some people did or not, I liked — so I was going to try and combine those two. And then I really relied on the animated series, ‘Batman: The Animated Series.”

Watch our interview above for more from West about taking on Bane.