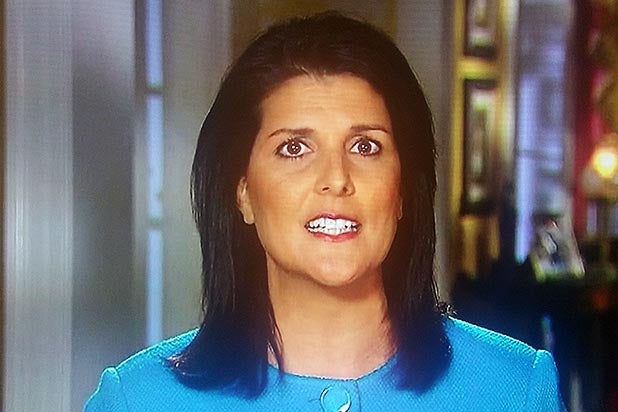 South Carolina Gov. Nikki Haley delivered an emotional response to President Obama’s State of the Union address on Thursday, working in a dismissal of GOP candidate Donald Trump’s fearmongering about Mexicans and Muslims.

Haley said that as a daughter of immigrants, she not that much different from millions of other Americans.

“Immigrants have been coming to our shores for generations to live the dream that is America… Today, we live in a time of threats like few others in recent memory,” she said. “During anxious times, it can be tempting to follow the siren call of the angriest voices. We must resist that temptation.”

CNN’s Jake Tapper surmised that Republican leaders may have chosen Haley to give the party’s State of the Union response because of her past criticism of Trump.

Haley didn’t mince words when talking about the president, saying that his “record has often fallen far short of his soaring words. As he enters his final year in office, many Americans are still feeling the squeeze of an economy too weak to raise income levels.”

“Even worse, we are facing the most dangerous terrorist threat our nation has seen since September 11th, and this president appears either unwilling or unable to deal with it,” she said. “Soon, the Obama presidency will end, and America will have the chance to turn in a new direction.”

Haley also talked about what she said were the differences between the president and the GOP.

“If we held the White House, taxes would be lower for working families, and we’d put the brakes on runaway spending and debt,” she said. “We would make international agreements that were celebrated in Israel and protested in Iran, not the other way around.”

But Haley started her remarks by saying Republicans bare some of the responsibility for the gridlock in Washington.

“We need to be honest with each other and with ourselves,” she said. “While Democrats in Washington bear much responsibility for the problems facing America today, they do not bear it alone. There is more than enough blame to go around.”

In a particularly emotional moment, Haley talked about the Charleston shooting that rocked her state last summer.