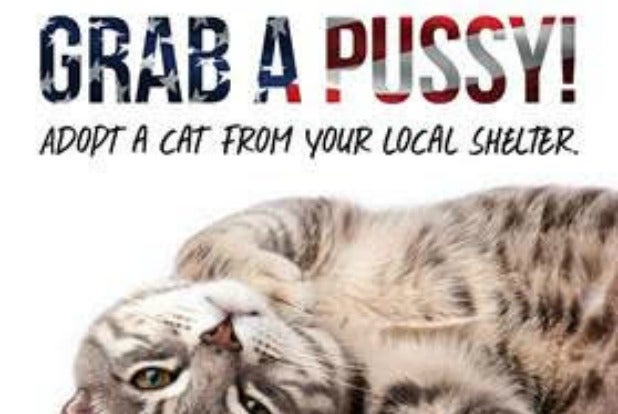 Grabbing pussies is not necessarily a bad thing, PETA says — as long as we’re talking about kittens.

A new billboard from the animal-rights organization riffs off the biggest scandal of the 2016 election season. “Grab a Pussy!,” the headline blares in the red, white and blue of the American flag. “Adopt a cat from your local shelter.”

The reference, of course, is to GOP nominee Donald Trump, who was heard bragging that he would grab women “by the pu–y” in a leaked 2005 videotape.

According to a PETA spokeswoman, the billboard has been approved by at least one outdoor advertising company, Atlantic Outdoor, although that company may not have free space in the New York area until after the election. Meanwhile, PETA is seeking approval from other companies.

The idea is to push people to adopt animals from teeming shelters, rather than shop from pet stores or breeders. “The new nonpartisan ad campaign aims to urge New Yorkers to choose the right catidate by electing to adopt one of the 20,000 cats taken in by city-run shelters each year,” according to a PETA news release.

And why not use the most cat-astrophic presidential race ever to make that point?

“The sensationalism of this election has rendered many other important issues invisible,” PETA President Ingrid Newkirk wrote in a statement.

“We hope this ad will encourage people to think for a second about the crisis facing cats and other animals and — if they have the time, love, patience, and funds to do so — to consider opening their homes to one or two beautiful cats from a shelter.”