“I was working at this litte place called Taxi Music in a cubicle by Calabasas,” she said, as an assortment of artists ranging from Bee Gee Barry Gibb to Lil Yachty watched from the front row tables at the Theater at the Ace Hotel in downtown L.A.

As of last Friday (Feb. 10), the “Roar” singer is back with new single “Chained to the Rhythm,” new blonde hair, and a slot performing on the Grammys.

Grange kicked off what turned in to a four-hour-plus event by dubbing Perry “the star of the weekend.” 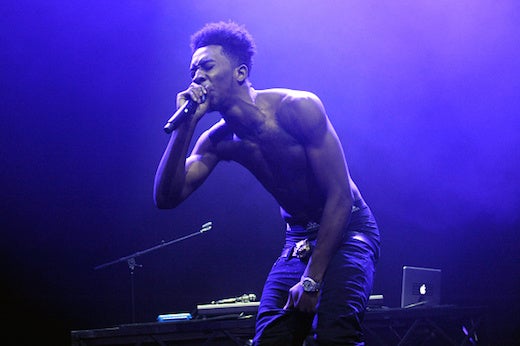 Desiigner, before he vomited twice on stage. (Timothy Norris/WireImage)

Like Perry, the artists from UMG’s varied labels kept it real while playing for the seated crowd of execs and seen-it-all music insiders on Saturday afternoon.

Take “Panda” singer Desiigner, for instance. Standing on a flimsy cocktail table, the shirt-off, pants-down, mic-flipping rapper executed his signature shock: vomiting on stage mid-song. Desiigner did this not once, but twice.

In addition to that shot of adrenaline, the gathering included performances by One Direction’s Niall Horan (solo), ethereal Glassnote vocalist Aurora, “The Voice” standout Jordan Smith (singing “Somewhere Over the Rainbow”), Big Sean (reminiscing on his incredulity at being signed to his favorite artist Kanye West’s label), 32-year-old Motown breakout BJ the Chicago Kid, and barefoot Bea Miller, the “X-Factor” alum who just turned 18 this week. 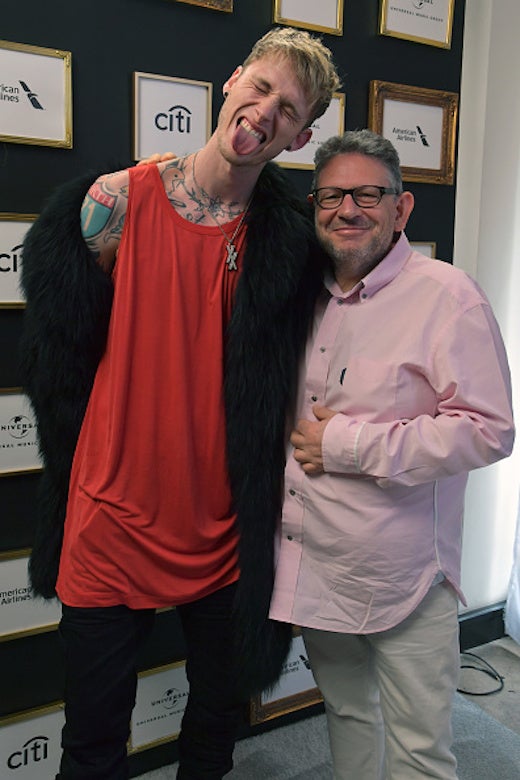 The only artist who matched the cackle of Desiigner was Machine Gun Kelley, who played the industry room as fearlessly as a homecoming show in his native Cleveland.

“Machine Gun Kelly… No. 1 album in the mothaf—in’ country,” he shouted to the crowd of peers. Wearing a fur coat, jumping off the drum riser, and parading through the audience, MGK evoked early Kid Rock.

The midnight-level performance belied the daylight outside as well as the mostly sedate, seated crowd (mainly in blazers), which washed down bottles of rosé on and nibbled on artisan bowls of cracker jacks and asparagus wraps.

(The menu mirrored what you might expect in an American Airlines first class lounge, which makes sense since AA and Citi sponsored and hosted the event with UMG.)

Also Read: Everything You Need to Know About 2017 Grammy Awards Broadcast

With less bombast, another showcase highlight came from Berry Gordy, who spoke from the audience. The Motown founder revealed a teaser from the forthcoming Motown documentary called, appropriately, “The Story of Motown.” Gordy opened his personal archives to producers, reportedly including James Corden, for the first time.

Grammys Party Pics: The Chainsmokers are the Princes of Music's Big Weekend (Photos)

The Chainsmokers headlined Spotify's pre-Grammys party at the Belasco Theater in downtown L.A. The relationship is symbiotic, as the music industry's most powerful distribution entity and the Chains scored massive success together with "Closer," "Paris," "Roses" and "Don't Let Me Down" in the last 12 months.