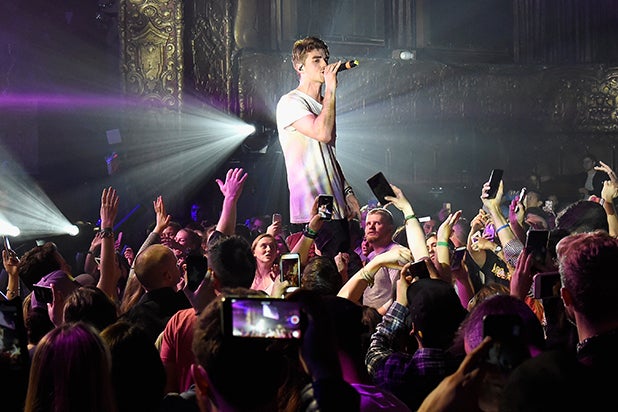 Getty Images
The Chainsmokers headlined Spotify's pre-Grammys party at the Belasco Theater in downtown L.A. The relationship is symbiotic, as the music industry's most powerful distribution entity and the Chains scored massive success together with "Closer," "Paris," "Roses" and "Don't Let Me Down" in the last 12 months. 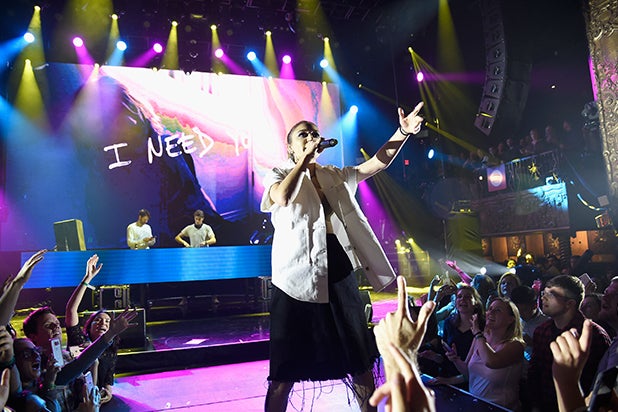 Getty Images
Just recently a legal adult at 18, Daya turned up to sing her part on the Grammy-nominated "Don't Let Me Down." 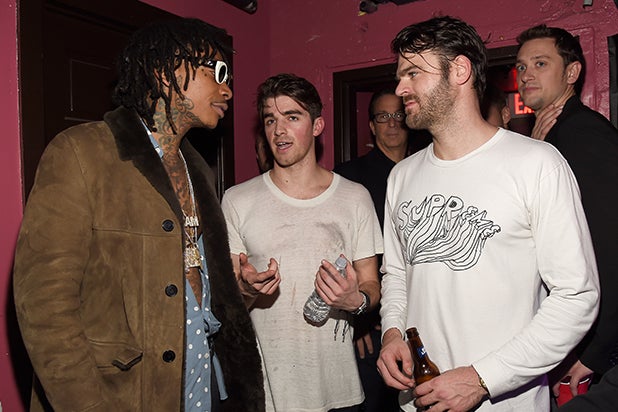 Getty Images
Wiz Khalifa hung with Drew (left) and Alex (right) backstage after their set. Khalifa would stay on to DJ the after-party. 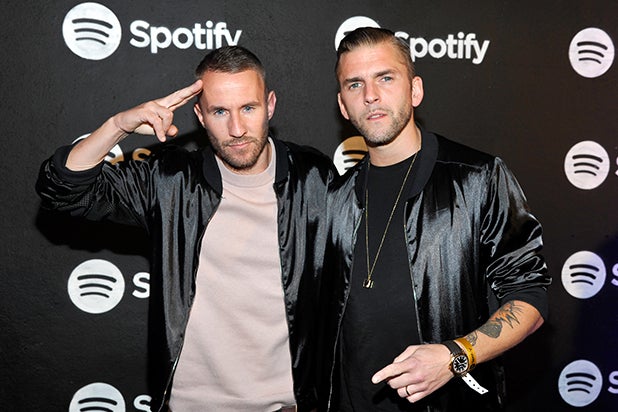 Getty Images
The Galantis Guys ("U & I," "Peanut Butter Jelly") checked in on the scene. See you at Coachella 2017, boys. 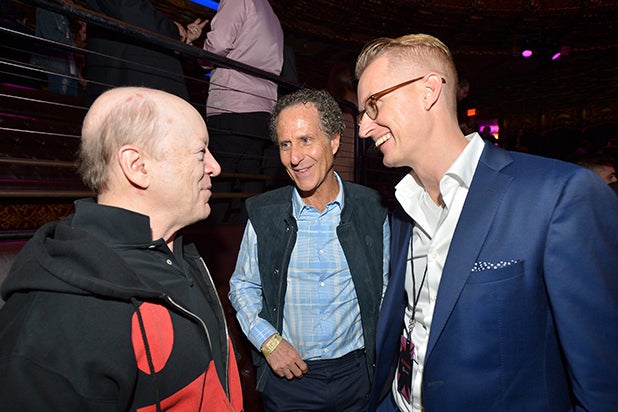 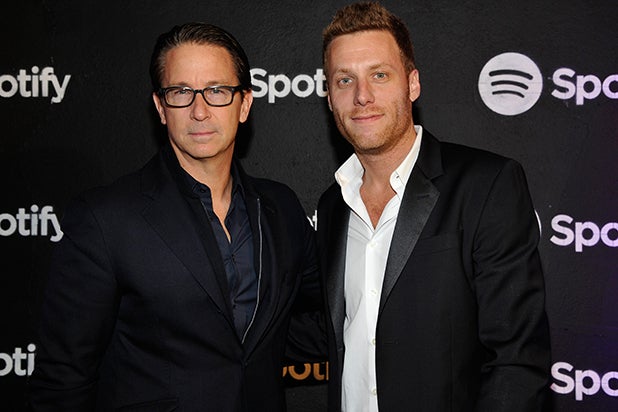 Getty Images
Adam Alpert (right) is the non-immoral, non-criminal version of Lou Pearlman, the unseen third head in The Chainsmokers who has managed them brilliantly for years. 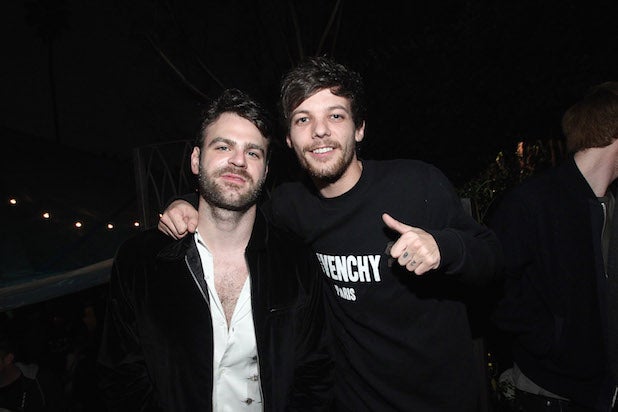 Getty Images
Chainsmokers x One Direction?   The Chains' Alex Pall (left) books all the collaborations for the duo. At their own "Turn Up" at Absout Elyx CEO Jonas Tahlin's house on Friday night, Pall and Tomlinson huddled up. Note: Louis scored a radio hit with Steve Aoki ("Just Hold On"), so he's in the orbit. 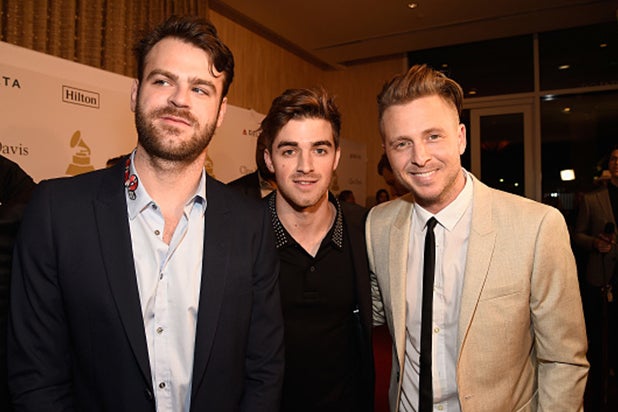 Kevin Mazur/WireImage
On Saturday night, the Chains hung with Ryan Tedder at Clive Davis' party. As the trio were concluding a recent studio session,  they had a surprise guest walk in on them: Bono. 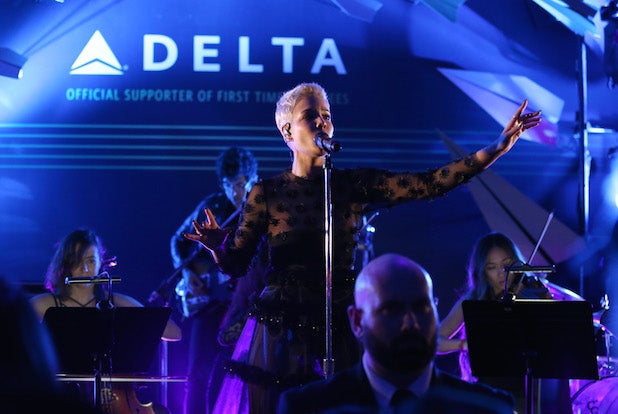 Mikey Glazer
The Delta event was also a sneak preview of Beauty & Essex, the super hot NYC and Vegas restaurant from the TAO Group that is opening soon on the 6400 block of Selma in Hollywood.   After never having a venue in L.A., the TAO Group is taking over the full block adjacent to the Dream Hotel with TAO (restaurant only, no club), Avenue (intimate lounge), the aforementioned B&E, and a rooftop "Highlight Room" space all about tilt L.A. nightlife to Hollywood. 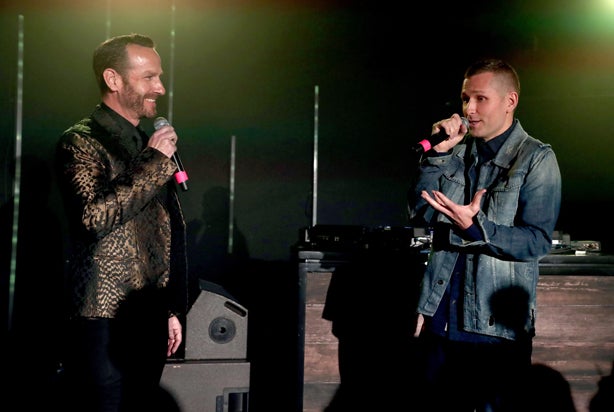 Todd Williamson/Getty Images for Mastercard
Before Kaskade (right) made his way to Spotify's bash, he shared the stage with LA's music yoda, Jason Bentley, for an event with Mastercard at the old Tower Records on Sunset. 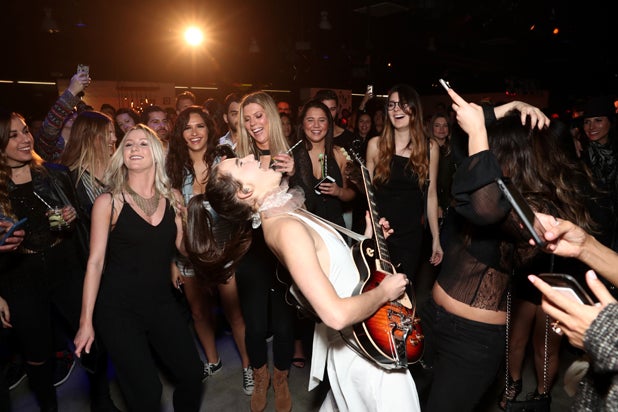 Todd Williamson/Getty Images for Mastercard
Dubbed the #ThankTheFans House, there have been a series of consumer-facing events in the famed space over the weekend.   Here, the "Sophie" half of electronic duo Sofi Tukker, nominated for best dance electronic record for their song "Drinkee," ventures deep into the heaving mass. 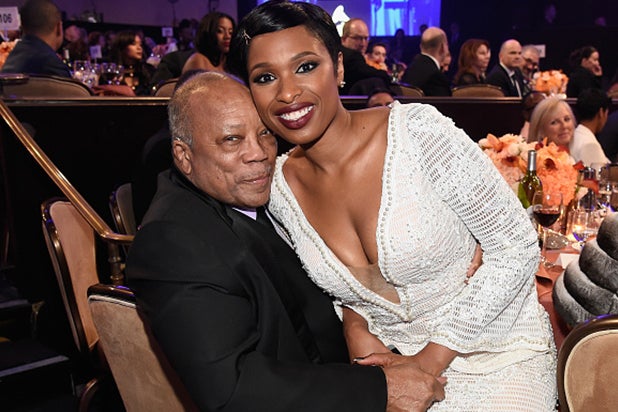 Kevin Mazur/Getty Images
At Clive Davis' party at the Beverly Hilton on Saturday night, Quincy Jones' lap got a +1:  Jennifer Hudson. Her performance of Leonard Cohen's "Hallelujah" was a standout amongst the bill that included Maxwell, Chance the Rapper, and Neil Diamond as the closer. 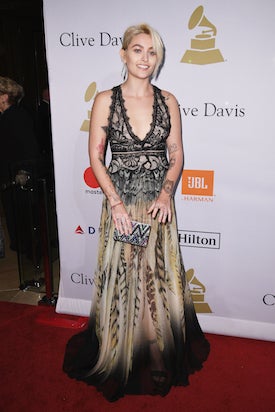 Getty Images
Paris Jackson was one of the surprising RSVP's. 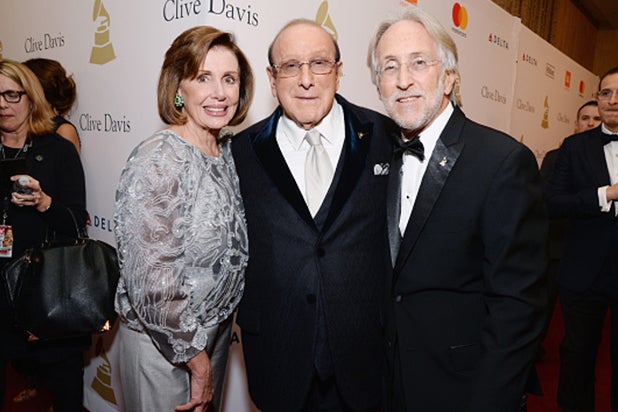 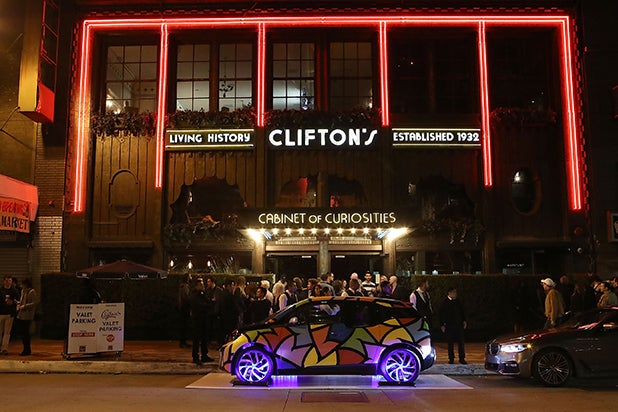 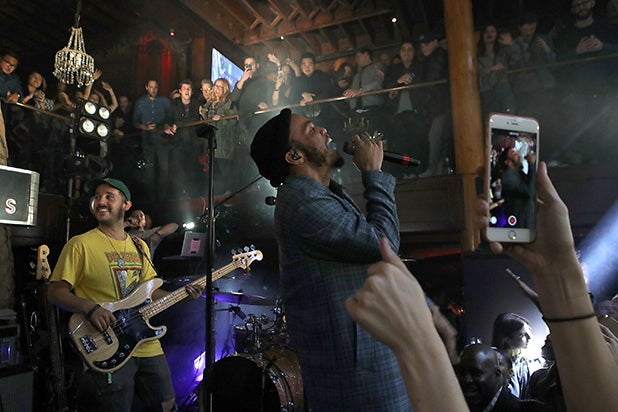 Anderson .Paak headlined this event, the latest stop in his own march through Grammy weekend. 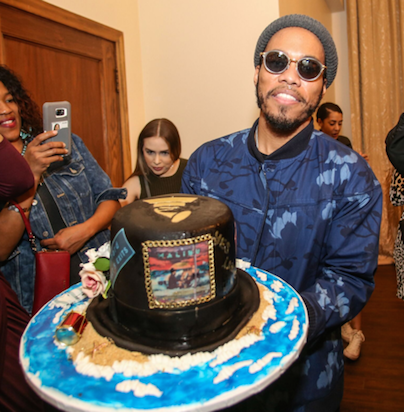 Thaddeus McAdams
Paak is a challenger to The Chainsmokers' "Princes of Grammys Weekend" crown. Ciroc threw him a birthday party on Thursday night in West Hollywood.   By Friday, he'd join the #ThankTheFans House on Sunset before Soho House's downtown pop-up on Saturday. 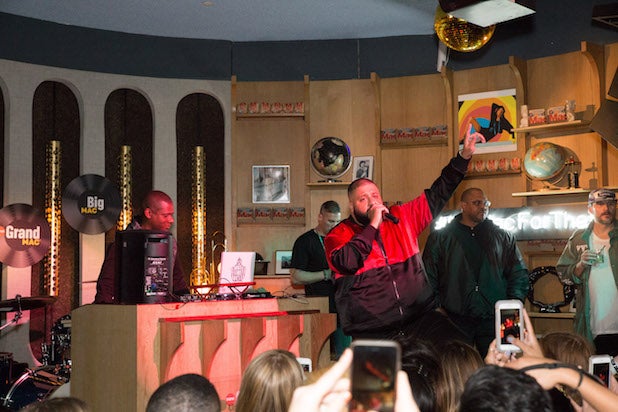 Rick Williams
DJ Khaled played a party for McDonald's toasting the "Year in Music". Talent like Kelly Rowland and Jamie King joined in the celebration at the Peppermint Club in West Hollywood launching a the new "Grand Mac" and "Mac Jr" sandwiches. 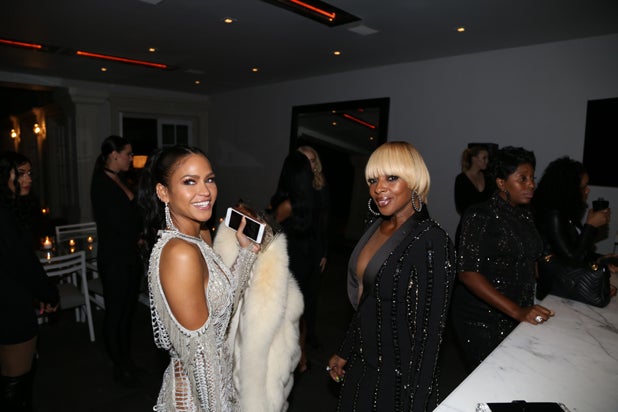 Combs Enterprises
After Clive's, everyone headed to Diddy's house. Here, Cassie and Mary J. Blige (who had an emotional night revealing the struggle of her divorce) hit the bar. 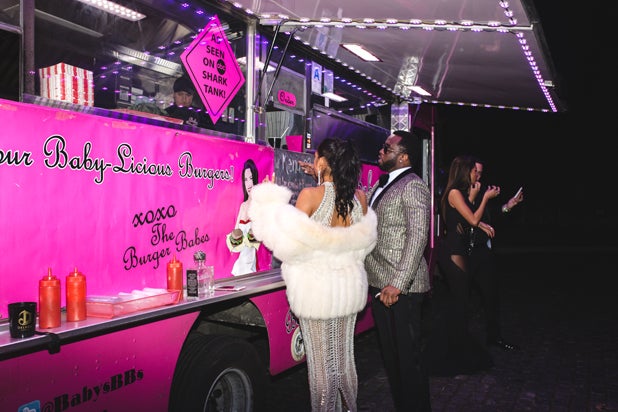 Combs Enterprises
Diddy had this pink burger truck pull up outside. 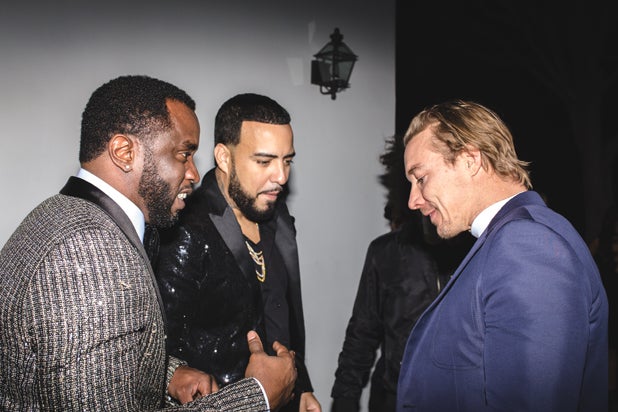 Combs Enterprises
Inside, French Montana assumed his usual position on Diddy's wing. Diplo joined the mix at what was slugged a "Ciroc After Hours". Not pictured: Stevie Wonder, T.I., and single Tobey Maguire. 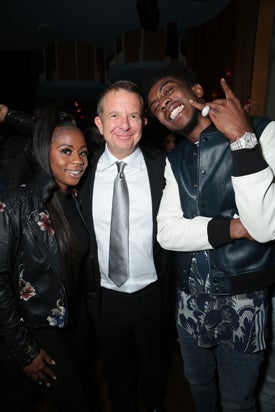 Michael Underwood/ABImages
UTA threw its first Grammy party at the recently opened Peppermint Club in West Hollywood, the collaboration between John Terzian's h.wood Group and Interscope records.   After puking twice on stage at Universal's showcase on Saturday afternoon, Desiigner (right) had not slowed down at all. He huddled up with manager Zana Ray and UTA CEO Jeremy Zimmer. For more on Desiigner's rowdy industry performance, click here: Also Read: Grammy Parties: Katy Perry Recalls Her Days as a ‘Walking Overdraft Fee of $38’ (Video) 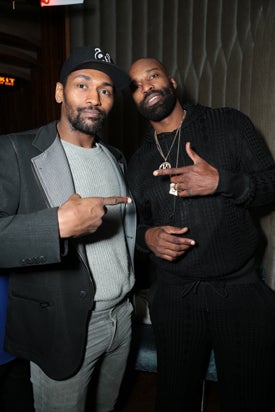 Michael Underwood/ABImages
UTA's music bash was not limited to the music industry: Laker Metta World Peace and Baron Davis made the scene... 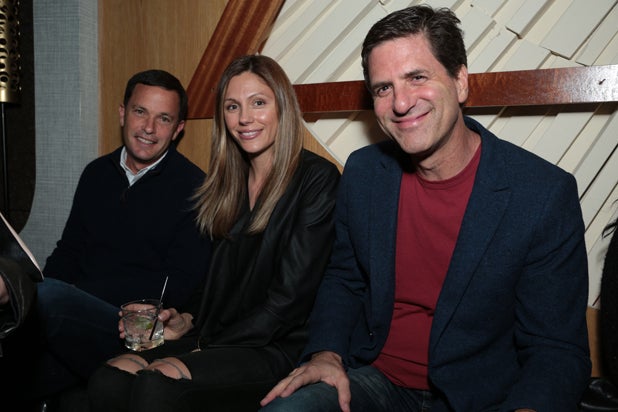 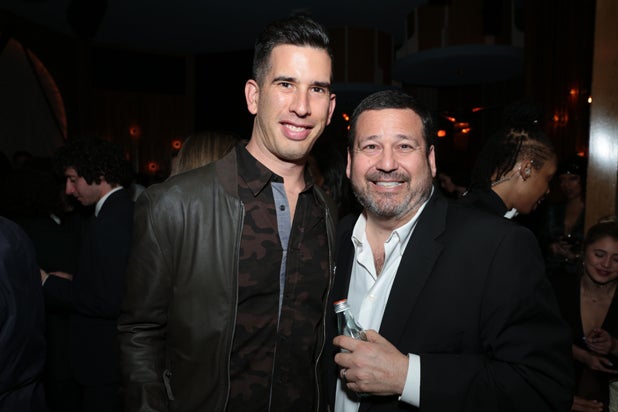 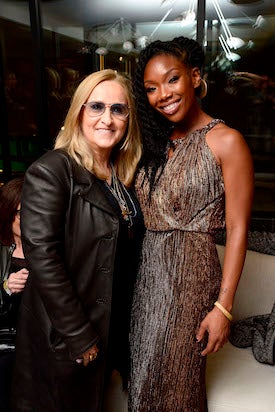 Marc Flores/Getty Images
At Primary Wave's party atop the London on Saturday night, Melissa Etheridge and Brandy linked up... 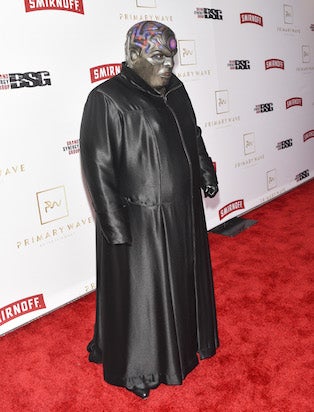 Michael Bezjian/Getty Images for Primary Wave
As Cee Lo Green unveiled a new persona, "Gnarly Davidson." It looks like a riff on the first "Star Wars" reboot. Taraji P. Henson, Ray J. and Michael McDonald were amongst the guests at the Smirnoff-hosted bash. 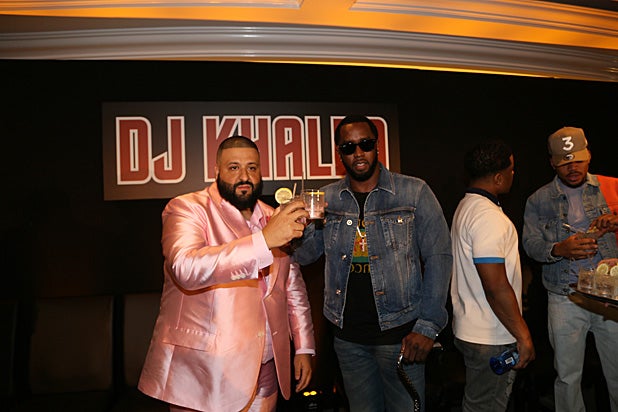 CWS
Diddy and DJ Khaled share a toast of "CÎROC Grateful” -- the official cocktail of Khaled’s 10th album “Grateful” -- on Thursday, Feb. 9 at a private pre-Grammys party in Beverly Hills. 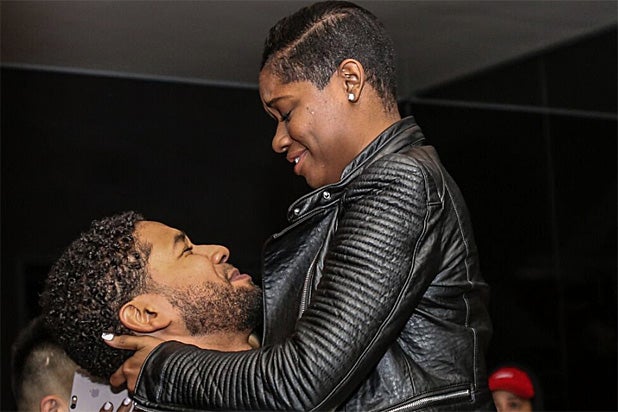 Arnold Shoots
French Montana gets into the Grammys spirit at the “Hustle to the Top” dinner at Mr. Chow in Beverly Hills. "Empire" cast members Jussie Smollett, Sirayah, and Bre-Z joined in the CÎROC Ultra Premium Vodka-fueled celebration on Friday night.
The essential source
for entertainment insiders