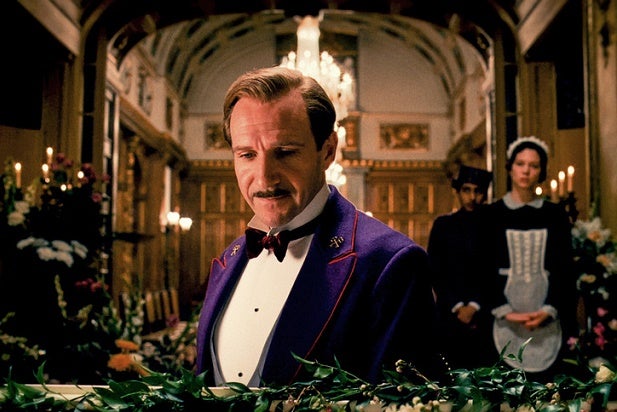 “The Grand Budapest Hotel” returned to theaters Friday and “Birdman” doubled its run, as Fox Searchlight looked to take its bounty of Oscar nominations to the box-office bank.

Wes Anderson’s elegant, zany period comedy will be in around 35 theaters across the country, even though “Budapest” has been available on DVD since June. And director Alejandro G. Iñárritu’s surreal showbiz sendup “Birdman” will be in more than 450 locations over the Martin Luther King Jr. holiday weekend, then look to double that next weekend.

“It was kind of crazy, even by our standards,” Searchlight’s distribution chief Frank Rodriguez told TheWrap. “We spent hours hustling hard drives out to the theaters who wanted the movies for Friday.”

Searchlight is a major player on the Oscar scene. Last year’s Best Picture victory for “12 Years a Slave” followed the 2008 win by “Slumdog Millionaire.” It’s been a perennial awards contender with recent films including “Black Swan,” “Best Exotic Marigold Hotel” and “Beasts of the Southern Wild.”

“The Grand Budapest Hotel,” which had a $31 million production budget, is the most commercially successful of the Best Picture contenders. With smaller films and indies dominating and the blockbusters left out, the average domestic gross of the eight films competing for the top honor is a modest $25 million.

“Budapest” stars Ralph Fiennes, Bill Murray and Tilda Swinton, and is set in an Eastern European resort between the two World Wars. That helped it become a hit overseas, where it has taken in more than $115 million, and it’s up to nearly $60 million at the domestic box office since rolling out in March.

In addition to the Best Picture nod and a directing nomination for Anderson, who also shared one for original screenplay with Hugo Guinness, “Budapest” was nominated for cinematography, makeup, art direction, costume design, editing and Alexandre Duplat’s score.

“We weren’t really thinking about a re-release because with the DVD and the on-demand it had been available just about everywhere,” Rodriguez said. “But when it got the nine nominations, we started getting calls from the theaters.”

“Birdman” stars Michael Keaton as a fading movie superhero trying to stage a comeback on Broadway, and co-stars Emma Stone and Edward Norton. All three were nominated for Oscars Thursday, along with director Iñárritu, and the film will also contend for original screenplay, cinematography and two sound awards.

Made for $10 million, “Birdman” is up to $27 million domestically since opening in October, and has added $8 million overseas. If this weekend goes well, Rodriguez says he’s looking to go even wider.

“Wild” has been steady and strong at the box office since opening on Dec. 3, having taken in $31 million. Witherspoon and supporting actress Laura Dern were both nominated Thursday for their work in the R-rated drama, director Jean-Marc Vallee’s followup to “Dallas Buyers Club.”

Also Read: ‘Wild’ Review: Reese Witherspoon and Her New Survival Drama Are Both Full of Surprises

“It’s been on a roll, so we aren’t going to change anything,” Rodriguez said of “Wild,” which will stay in roughly 1,300 locations.

“This should be a really interesting weekend,” said Rodriguez.