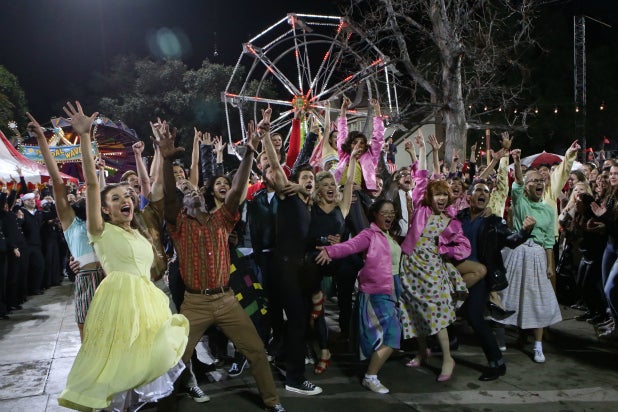 Marc Platt can spend Monday basking in the warm reviews for his excellent “Grease: Live” effort on Sunday, though the executive producer did notice one thing go wrong — and no, it wasn’t that audio dropout.

“There was a golf cart — you could actually see it, if you watch the telecast, you might not have noticed it — but it actually drove up on the curb and almost tilted over,” Platt told TheWrap on Monday. “When we saw that, there was a gasp in the truck. We held our breath for about three-and-a-half seconds. Thankfully it righted itself.”

Whether or not viewers noticed that near-spill, the 12.2 million total viewers who tuned in were aware of a more obvious one: That complete audio drop during the impressively shot “Hand Jive” dance contest. Platt told us that he’s not certain what exactly went wrong, but the EP thinks he can trace it back to a specific department.

“I think I heard it was in the transmission, I’m not sure,” he said. “It was thankfully corrected rather quickly. I’m not certain of the exact, technical reason it went down.”

Other than that, “Grease: Live” went more or less exactly as planned — oh wait, except for that whole crazy inclement weather thing.

“You do all the planning and then, of course, El Nino comes, and you figure something else out,” Platt said, adding optimistically, “but that’s what makes live TV.”

Platt’s planning had been going on for a year, but midway during those stages, producers realized that El Nino could ruin the usually reliable Los Angeles weather. So, the craftsmen and set designers doubled down, and they were actually ready for the  in the end — but not the wind firing off the mountains, which hit the Burbank, California, Warner Bros. lot like a “Wiz Live” tornado.

With winds gusting at 50 to 60 miles per hour, at 2 p.m. PT — two hours before showtime — engineers told Platt that an outdoor structure intended to house audience members for Jessie J’s big musical opening number was no longer safe. So the crew begrudgingly removed the constructed walls. An hour later, hands forced, Platt, director Thomas Kail and the rest of the team restaged “Grease (Is the Word)” to its “B” choreography version. But that’s not actually what you saw, because at 3:50, the  stopped, the wind died down and Platt got clearance from the engineers to go for the original plan. It was too late to reassemble the walls, but Platt actually liked the resulting look more anyway.

In other indoor-outdoor news, in case you were wondering, “You’re the One That I Want” was always going to be in the gym. There just wasn’t enough room elsewhere, Platt said. The cast did eventually make it to the outdoor carnival, but logistics dictated that the first part of the scene divert from the movie script.

Speaking of the gym, that set was far from other stages, requiring those golf carts we mentioned earlier. As zippy as they are, there were still a few close calls in hitting marks and time — even when the carts were not nearly crashing.

For example, Julianne Hough had to get from the gym to the house in two minutes and 12 seconds, Platt told us, or no one would have been there to sing “Hopelessly Devoted.”

She made it, and nailed it. No sweat.

Great as show star Hough was as Sandy, another Lady perhaps stole the show with her performance and courage.

Vanessa Hudgens, who played Rizzo, lost her father to cancer just 24 hours before Sunday’s live broadcast. We asked Platt about his discussions with the actress and her brave decision to continue on.

“There was never an issue in her mind. She knows from the theater — and in the theater, at the last minute, the show must go on,” he said. “She was determined, and she thought it was the way to honor the memory of her father. She put her sadness aside for six hours, put it in a box, and it fueled her very brave and wonderful performance.

“We brought her mom to Warners so she could watch the East Coast feed and be near Vanessa, and they felt it a celebration,” Platt continued. “We’re very proud of her, and the cast and crew all rallied behind her. It was very emotional for everybody, but really quite a beautiful thing.”