“Green Lantern” has found one of its Green Lanterns. Finn Wittrock will play the Guy Gardner version of the DC Comics superhero on the upcoming HBO Max series.

Gardner is described as “a hulking mass of masculinity, and, as rendered in the comics, an embodiment of 1980s hyper-patriotism. And yet, Guy is somehow likable.”

Wittrock’s Guy will be joined by multiple Green Lanterns in the series, which spans multiple decades. Along with Gardner, it will feature the Jessica Cruz, Simon Baz and Alan Scott versions of the character, as well as other notable characters like Sinestro and Kilowog. 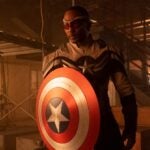 Alan Scott was Earth’s first Green Lantern and will be a gay man like his comic’s counterpart. In the comics, Sinestro is a former member of the Green Lantern corp. who goes rogue.

The series will be co-written and executive produced by Seth Grahame-Smith and Marc Guggenheim, with Grahame-Smith serving as showrunner. Guggenheim co-created The CW’s “Arrow” and was a major creative force in the building of the network’s shared universe of DC Comics characters.

In the much-maligned 2011 film version of “Green Lantern,” Ryan Reynolds played the Hal Jordan version of the character, opposite Mark Strong as Sinestro. He was an ally in that film, but a post-credits scene teased him eventually becoming the villain that DC Comics fans know. The late Michael Clarke Duncan voiced Kilowog.

Along with “Green Lantern,” HBO Max is now the home of all DC Universe series like “Doom Patrol,” “Harley Quinn” and “Titans.” J.J. Abrams is also developing a “Justice League Dark” series.

Wittrock is a Ryan Murphy veteran having appeared in “American Horror Story” and “The Assassination of Gianni Versace: American Crime Story.” He currently stars in Murphy’s “Ratched” on Netflix.