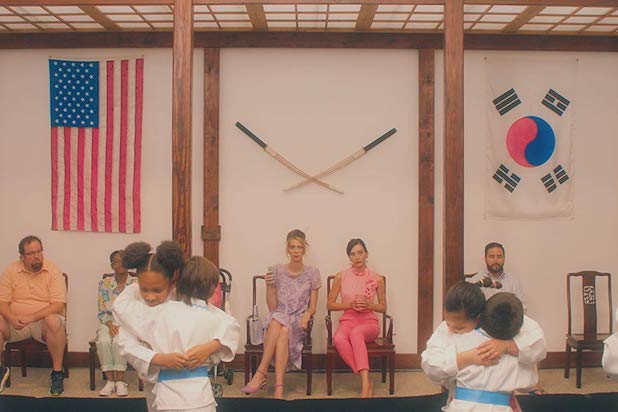 “Greener Grass” is based on a 2016 short film of the same name that won the Special Jury Recognition for Writing prize at SXSW. It stars, is written and directed by alumni of the Upright Citizens Brigade, Jocelyn DeBoer and Dawn Luebbe.

“Greener Grass” is a deliciously twisted comedy set in a demented, timeless suburbia where every adult wears braces on their straight teeth, couples coordinate meticulously pressed outfits, and coveted family members are swapped in more ways than one in this competition for acceptance. The film is a twist on everyday suburban life – both a love letter and an “FU” – where the characters make life-altering decisions on a whim and being polite is held to a highest standard, even if it means you go too far.

“Greener Grass” had its world premiere at the 2019 Sundance Film Festival and will screen at the SXSW Film Festival on March 8. IFC Midnight will release the film in 2019.

“With ‘Greener Grass,’ Jocelyn and Dawn, like many great comedy duos before them, prove that their fresh, whip-smart voices are ready to be heard across the country. We could not be more thrilled to welcome them to the IFC family, where we are committed to championing new voices in independent cinema,” Arianna Bocco, EVP of Acquisitions and Productions at IFC Films/Sundance Selects/IFC Midnight said in a statement.

Also Read: 17 Buzziest Movies Heading to SXSW This Year, From 'Us' to 'The Peanut Butter Falcon' (Photos)

“IFC has been a champion of ‘Greener Grass’ since its beginning as a short film and it’s long been a dream of ours that the feature version would land there. IFC is known for having the coolest, weirdest, most incredibly curated independent movies around. We are thrilled ‘Greener Grass’ will be joining the ranks and blown away by Arianna’s passion,” DeBoer and Luebbe said in a statement.

The deal for the film was negotiated by Arianna Bocco (IFC) and 30WEST on behalf of the filmmakers. Kinology is handling international sales.