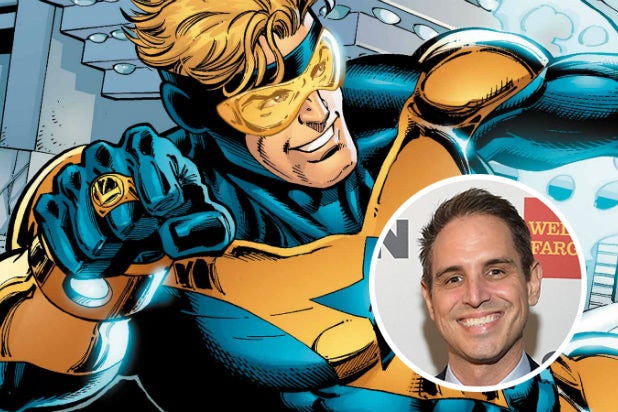 It’s been a few years since we’ve seen any movement on the “Booster Gold” movie, a DC Comics adaptation about a thoroughly modern superhero that is being shepherded at Warner Bros. by busiest-person-alive Greg Berlanti.

“It’s still in development with DC,” Berlanti told TheWrap about the feature, which is based on one of the quirkier heroes in the DC canon, whose superpower is a keen awareness of the power of celebrity and the cunning thirst to attain it. “They’re trying to figure out both the distance that we still have to travel and how we want to execute it.”

Another factor for the studio, he said, was “how it’s going to fit into their greater landscape” — meaning the rest of the DC Films slate that has been in a state of flux given the muted critical and box office reception for films like “Suicide Squad” and “Justice League.”

“That’s really on them, they’re still kind of determining their order of business on that end,” said Berlanti, who directed Fox’s gay teen dramedy “Love, Simon” that hits theaters this month.

In 2016, one year after the project was first announced, Berlanti said the “Booster Gold” movie would not be woven into the current shared film universe that members of the Justice League occupy at Warner Bros., like Batman and Wonder Woman and friends.

Booster Gold, whose civilian name is Michael Jon Carter, is born very far into the future and leverages that to travel back in time where he can stage splashy rescues and earn a fortune using outcomes to his advantage.

“We have a draft with a writer I liked very much,” Berlanti said. He did not specify the writer, but Zack Stent (“X-Men: First Class,” “Thor”) has previously been credited on the project.

A spokesperson for the Warner Bros. film group did not immediately comment on the project’s status or production timeline.

Also Read: 'The Joker Movie' in the Works at DC Films With Todd Phillips

“If the studio is excited — it’s obviously their determination. We finished all the work we need to do on the draft, I would love to do something in that space. I’m still a little clueless on how movies come together. I show up to work every day and make the work as good as I can but then they call me and say, ‘We’re making it!'” Berlanti said.

For now, Berlanti will have to make do with his TV properties like “Supergirl,” “Arrow,” “The Flash,” “Black Lightning,” “Riverdale” and “Blindspot.”