“Today the Leakes family is in deep pain with a broken heart,” publicist and family friend Ernest Dukes said in a statement. “After a long battle with cancer, Gregg Leakes has passed away peacefully in his home surrounded by all of his children, very close loved ones and wife Nene Leakes.” 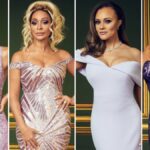 Also Read:
‘Real Housewives': These Originals Have Stuck Through the Drama Since Day One (Photos)

Leakes was diagnosed with colon cancer in June 2018 but went into remission. In June 2021, his wife announced that his cancer had returned and he was recovering in a hospital after surgery.

“We ask that you pray for peace and strength over their family them allow them to mourn in private during this very very difficult time,” Dukes’ statement said.

Last week, NeNe said that Gregg was “transitioning to the other side” amid his cancer battle. She followed that up with an Instagram post that simply read “broken” with a prayer and broken heart emoji.

Gregg married NeNe in 1997, and the couple divorced in 2011 but remarried in 2013. Their second wedding was chronicled in the series, “I Dream of NeNe: The Wedding.”

NeNe Leakes was an original cast member of “The Real Housewives of Atlanta,” which debuted in 2008. Her and Gregg’s relationship woes and reconciliation were chronicled on the series over 12 seasons. The couple have a son, Brentt. Gregg was also stepfather to Nene’s son Bryson and four other children.

Check out condolences from members of “The Real Housewives” franchise: