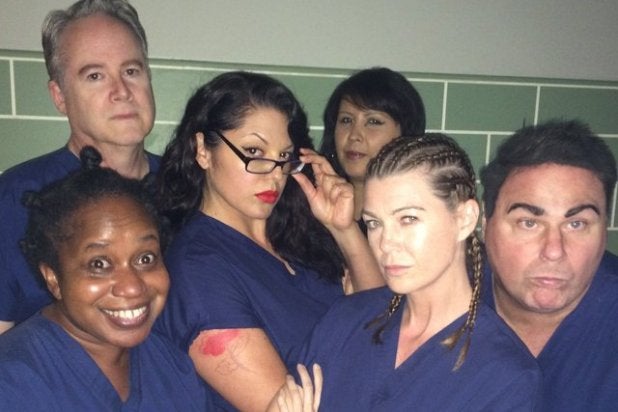 The cast of ABC’s “Grey’s Anatomy” looked familiar, if a little off. Ellen Pompeo posted a photo to her WhoSay page with her costars doing their best impressions of the ladies from Netflix’s “Orange Is the New Black.”

She gave it the caption “Blue is the new black,” as they rocked blue scrubs rather than the prison colors of the inmates at Litchfield Correctional Facility.

When asked by one fan on Twitter if this meant Pompeo watched the prison drama, Pompeo shot back that everyone should watch it. “Those girls are giving it,” she wrote.

Looking at pictures like this always sparks the imagination, as we start imagining crossovers, like a Litchfield inmate being sent to Seattle Grace for medical treatment, or trying to fathom how Pompeo’s Meredith Grey would fare in prison.

She might surprise us, though we’d put our money on Chandra Wilson’s Miranda Bailey or much-missed Cristina Yang over Dr. Grey any day of the week.

“Grey’s Anatomy” returns to ABC for its 11th season on Thursday, Sept. 25 at 8 p.m. ET. There is no planned crossover with Netflix’s “Orange Is the New Black.”