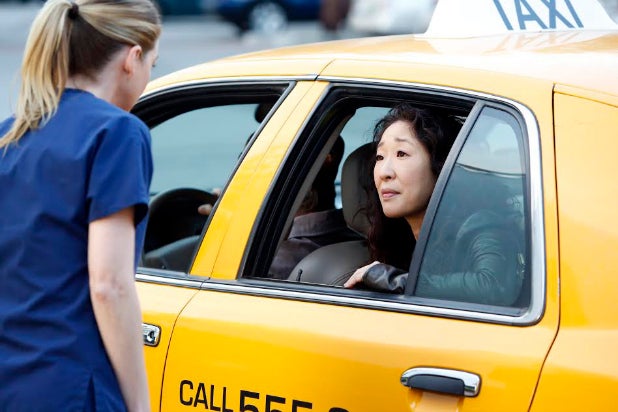 (Spoilers included below. If you have not yet watched Thursday’s “Grey’s Anatomy,” stop reading now.)

The “Grey’s Anatomy” Season 10 finale doubled as Sandra Oh‘s final episode, turning up the drama and waterworks to the max. Nowhere was this more apparent than on Twitter Thursday night, where fans expressed sadness, gratitude and a uniformed appreciation of one singular quote from the episode.

Judging by the below sample, both Oh — who played Dr. Cristina Yang for 10 seasons — and show creator Shonda Rhimes must have had their Interactions pages blown up with thanks and praise. We’ll find out soon enough how well-received the season ender translated to Nielsen ratings.

For now, here are some of the top tweets:

That was the most amazing thing ever!Thank you @IamSandraOh and @shondarhimes for letting us say goodbye to Cristina! #GreysFinale #ThankYou

If McDreamy and Meredith break up I will literally give up on life. #GreysFinale

That #GreysFinale was killer. Can’t stop thinkin about it!!!

A little concerned about how emotionally attached I am to a fictional character.. This farewell to Christina episode is too much #greys

Just watched #GreysFinale OMG Ellis & Richard had a DAUGHTER?!?! Meredith is gonna FLIP THE F*%K OUT!!!!!

“Don’t let what he wants eclipse what you need. He’s very dreamy, but he’s not the Sun – you are.” #GreysFinale #FarewellChristina

“Don’t let what he wants eclipse what you need. He is very Dreamy but He is not the sun, you are” #GreysFinale

“don’t let what he wants eclipse what you need. he is very dreamy, but he is not the sun. you are.” #greysfinale