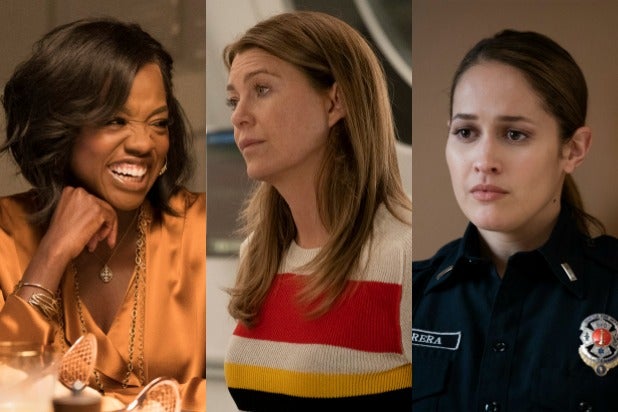 TGIT fans can breathe a sigh of relief, as ABC has renewed the Shonda Rhimes-produced “Grey’s Anatomy,” “How to Get Away With Murder” and “Station 19.”

While the “Grey’s” firefighter spinoff and Viola Davis-led “HTGAWM” were picked up for a third and sixth year, respectively, “Grey’s” — the Ellen Pompeo-led medical drama that started it all — got a two-season renewal for Seasons 16 and 17.

“I’m thrilled to continue at the helm of ‘Grey’s Anatomy,’ and I’m honored and energized by the opportunity to run ‘Station 19,’ as well. To expand upon the world Stacy McKee created, and further merge it with the world of ‘Grey’s,’ is an exciting challenge,” Vernoff said.

“Everyone at Shondaland is thrilled that our fans’ commitment to TGIT continues,” Rhimes and producing partner Betsy Beers said in a joint statement. “We are so proud of Krista and Pete and the work they do. Making the choice to have Krista oversee ‘Station 19’ was easy — the creativity she brings to the ‘Grey’s Anatomy’ universe continues a tradition of storytelling we hold dear.”

The trio of renewals come after ABC canceled the Shondaland legal drama “For the People” on Thursday, which is currently airing its second season. It first debuted as a midseason replacement last year, and has since struggled to gain a foothold in the ratings. The currently airing second season is averaging just shy of three million viewers an episode, with a 0.51 rating among adult viewers under 50, according to Nielsen’s live-plus-same-day numbers.

Last year, Pompeo renewed her contract on “Grey’s Anatomy” through Seasons 15 and 16, becoming the highest-paid dramatic actress on TV at a record $20 million per year. At the time, the show was in its 14th season and had yet to be renewed for the additional years included in the “Grey’s” star’s deal.

Also Read: ABC Cancels 'For the People' After Two Seasons

“How to Get Away with Murder” is created and executive produced by Peter Nowalk (“Scandal,” “Grey’s Anatomy”). Rhimes, Beers and Stephen Cragg are also executive producers. The drama is another ABC Studios production.