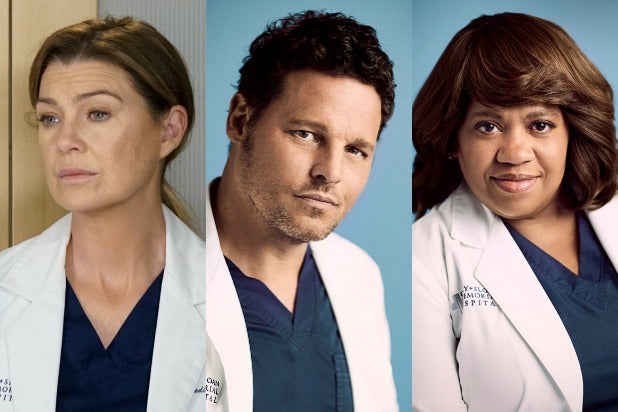 “Grey’s Anatomy” has been on ABC for 15 seasons and more than 350 episodes. That incredible run means unavoidable actor turnover. Now that Justin Chambers has said he’s leaving the medical drama, which of the original cast members are even left?

The title itself references main character Meredith Grey, who is played by star Ellen Pompeo. She’s still around, so the show is still on the airwaves.

Along with Meredith/Ellen, the only other O.G. cast members now remaining are Chandra Wilson, who plays Dr. Miranda Bailey, and James Pickens Jr., who plays Dr. Richard Webber. They’ve both appeared in every single episode since the series launched back in 2005.

The actor with the next-highest appearance tally is Kevin McKidd, who plays Dr. Owen Hunt. He got a late start, joining the show in 2008. Jesse Williams, a.k.a. Dr. Jackson Avery, came on the program one year later.

Sandra Oh started with the show as well. She and her character Dr. Cristina Yang left in 2014.

Eric Dane is associated with the early seasons, but he actually wasn’t part of the first class. Dr. Mark Sloan joined in 2006 and left in 2012.

Jeffrey Dean Morgan boarded the same year that Dane did, but he only lasted until 2009.

And then of course there is Katherine Heigl. Dr. Izzie Stevens did more than 100 episodes of “Grey’s,” starting on Day 1 and signing off in 2010.

Kate Walsh was one of the freshmen. She left after a few seasons for spinoff “Private Practice,” but popped up again on “Grey’s” a few times.

T.R. Knight was also an original player. We said goodbye to his Dr. George O’Malley in 2009.

Isaiah Washington was a member from “Go.” His Dr. Preston Burke was scrubbed out in 2007 after Washington called co-star Knight a homophobic slur.