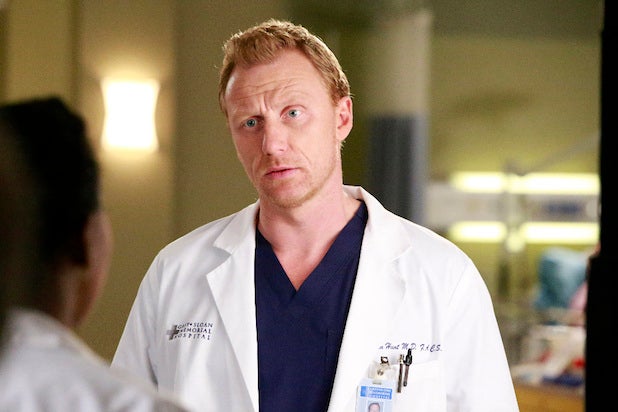 (Spoiler alert: Do NOT read on if you haven’t watched Thursday’s episode of “Grey’s Anatomy”)

Yeah well he’s just given all of us husband goals.

Hunt has been an a-plus role model almost from the start. He and Dr. Shepherd — McDreamy’s sister — fell in love and got married. Great for them, but during their wedding, Amelia freaked out and ran out on Owen. Yet all that time, he was patiently waiting on her until she returned, not really fussing.

But that’s not even the best part…

Also Read: 'Scandal' Main Characters Ranked By How Shady They Are (Photos)

There came the point in the couple’s relationship where they differed on the issue of kids — Amelia didn’t want them, while Owen did (probably something you should discuss before getting married, but hey, who are we to judge).

But after taking some time to himself, Dr. Hunt comes back home to find Dr. Shepherd gone, and all she’s left behind is a note.

Since that episode – which aired way back when in November 2016 – Owen has considerately given Amelia her space. Even after finding out she was staying with a fellow doctor, all Owen did was show up to her door day after day, waiting for her to speak to him — which she didn’t.

Let’s be real: All Amelia has been doing is being selfish as hell and avoiding her husband.

Even when, after months of not seeing or speaking to each other, Dr. Hunt catches Dr. Shepherd in the hospital by chance, he doesn’t get upset or start yelling or being petty — he’s just happy to see his damn wife.

This dude is like the most patient and understanding husband of all time.

And he only just now blew up on Amelia — which wasn’t even really a blowup given the circumstances, if we’re being quite honest — this episode.

As the episode begins, after another day of just popping up all normal, like everything at the hospital is super cool, Owen pulls Amelia into a room and tells her what she’s not about to do is pretend like they’re just doctors working side by side when they haven’t spoken in about 632,821 years (exaggerated number).

He’s over here literally explaining to this grown woman how a marriage works telling her they took vows and promised to be together for better or worse and that she basically needs to get her life together and figure out what she wants because he’s not waiting around anymore.

Owen’s semi-tantrum didn’t really phase Amelia because she just kind of stood there and didn’t say anything as her husband gave her an ultimatum.

So we’re right back where we started, until the two end up confronting each other again later in the episode, getting all riled up to the point that Dr. Bailey had to intervene and tell them to take it elsewhere. So they did and still ended up getting nothing accomplished.

But the thing is, Owen didn’t divorce her annoying self on the spot and the two, again, ended right back up where they started.

9 Times Shondaland Had Us Shook, From McDreamy's Death to Quinn's Torture (Photos)

Quit playing with our emotions, Shonda

It's pretty much impossible to get through any Shondaland series -- "Grey's Anatomy," "Scandal," "How to Get Away With Murder" -- without balling our eyes out, but here are the top moments where Shonda Rhimes just went too far and had us shook.