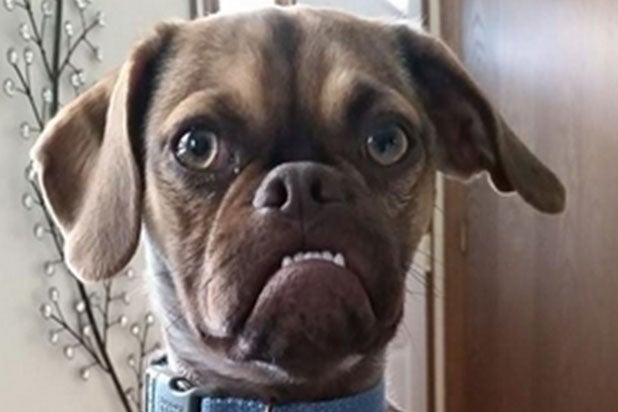 A new grumpy animal is making the rounds on social media: Earl the Grumpy Dog, a 5-month-old puppy that’s giving Grumpy Cat a run for her money.

When Earl’s owner, Derek Bloomfield from Iowa, posted an annoyed photo of the dog on Reddit, Earl quickly became a viral sensation with over two million views. Now, Earl’s Facebook page has 3,800 likes and his Instagram account has over 3,000 followers.

Bloomfield told the Mirror that although Earl looks angry he’s actually really friendly: the reason he looks so mad all the time is because of an underbite that permanently marks a frown on his wrinkly face.

“He is the most relaxed, content puppy either one of us (he and his girlfriend) has ever seen. Whenever he wants something he’ll calmly sit down and stare at us until we ask him the right question. Then he wags his tail in approval,” Bloomfield told Mirror. “He’s a daddy’s boy and loves to pick on his momma.”

Grumpy Cat became a celebrity after a picture of her scowling mug was posted on Reddit in September 2012. A Facebook fanpage for Grumpy Cat has attracted more than 7.9 million likes, and the cat has been featured in the documentary “Lil Bub & Friendz,” which screened at 2013’s Tribeca Film Festival.

But Grumpy Cat (real name: Tarder Sauce), wasn’t content to rest on those laurels. She went on to capture the coveted “Meme of the year” prize at the 17th annual Webby Awards, beating out the likes of Goats Yelling Like Humans and Gangnam Style.

Grumpy Cat’s puckered mug is the result of feline dwarfism. In 2013, TheWrap reported that Grumpy Cat got her own movie deal to star in “Grumpy Cat’s Worst Christmas Ever.”

See pictures of Earl The Grumpy Dog below.

Momma helping me find my ball…