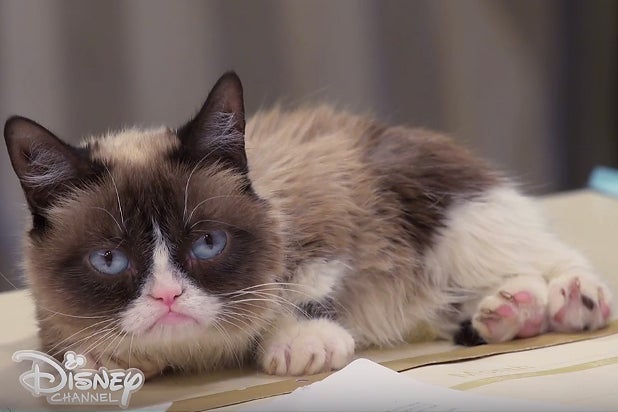 The cat, whose given name was Tardar Sauce, “passed away peacefully on the morning of Tuesday, May 14, at home in the arms of her mommy, Tabatha,” Bundesen wrote.

“Despite care from top professionals, as well as from her very loving family, Grumpy encountered complications from a recent urinary tract infection that unfortunately became too tough for her to overcome,” she added.

Bundesen, a resident of Morristown, Arizona, had attributed her constant frown and small kittenlike size to feline dwarfism.

Also Read: 16 Scene-Stealing Animals in Movies, From 'The Wizard of Oz' to 'Captain Marvel' (Photos)

When Tabatha’s brother, Bryan, posted photos of the cat on Reddit in 2012, they quickly went viral — achieving more than 1 million views in 48 hours, according to CNN.

In addition to inspiring countless PhotoShopped memes, Grumpy Cat appeared on TV shows and became a spokescat for Friskies cat food. The Bundesens soon followed with a line of merchandise.

“Besides being our baby and a cherished member of the family, Grumpy Cat has helped millions of people smile all around the world — even when times were tough. Her spirit will continue to live on through her fans everywhere,” Bundesen wrote on Twitter.

Some days are grumpier than others… pic.twitter.com/ws209VWl97