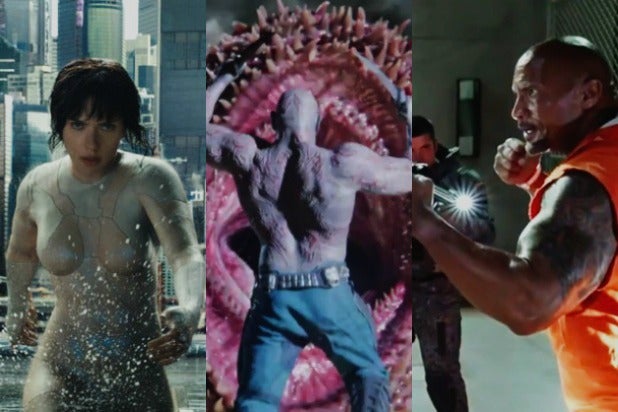 What movie is the Tom Brady of Super Bowl movie trailers? By two measures, the trailer for “Guardians of the Galaxy Vol. 2” got the best buzz during the big game. But by other indications, “Transformers: The Last Night” and “Pirates of the Caribbean: Dead Men Tell No Tales” were MVPs.

The films were just a few of the many that tried to build anticipation with new trailers during the biggest TV program of the year. Super Bowl LI also featured trailers for “Logan,” “Baywatch,” and “The Fate of the Furious.”

A Fandango survey provided exclusively to TheWrap said the “Guardians” trailer was the most popular among viewers. The ticketing company surveyed more than 1,000 moviegoers.

ComScore’s PreAct, a social media tracking service, also said “Guardians” got the most buzz. The trailer sparked 47,800 conversations on Twitter after airing during the pregame, according to the PreAct chart, which is based on Twitter volume stemming from the official hashtags from the trailer, as well as other keywords associated with the films.

“Pirates of the Caribbean: Dead Men Tell No Tales” started 24,200 conversations on Twitter after airing in the second quarter of the matchup between Brady’s New England Patriots and the Atlanta Falcons.

“Transformers: The Last Knight” was the third most popular trailer on social media, with 19,700 mentions. “The Fate of the Furious,” “Logan,” Baywatch,” “Ghost in the Shell” and “Life” followed.

But what did people search? A Google Trends comparison of “Guardians,” “Transformers,” “Logan,” “The Fate of the Furious” and “Baywatch” showed that “Transformers” scored the biggest spike in audience interest, followed by “Logan” and “Baywatch.” Their searches surged at different times, depending on when they debuted.

“The Fate of the Furious” was the third most popular, with “Guardians of the Galaxy” coming in fourth.

On YouTube, “Pirates” ruled. The trailer for Johnny Depp’s “Pirates” was the most popular, scoring over 2 million views on YouTube (and counting) since its debut on Sunday.

Scarlett Johansson’s “Ghost in the Shell” followed, but that video clip was released three days before the Super Bowl. In total, the film has over 1.77 million views on the video platform. “Guardians” came in close behind, with 1.72 million views at the time of publication.