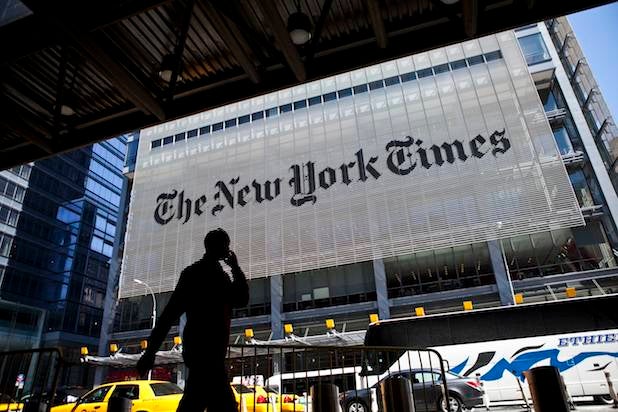 When the New York Times speaks, the world listens.

And now, with news reports from the most-recent IPCC climate talks in Japan sending shivers down the spines of people everywhere, the newspaper-of-record goes out on a springtime limb to report on a genre that most newspapers have shied away from even mentioning.

The Times editors headlined the article “College Classes Use Arts to Brace for Climate Change,” written by national reporter Richard Perez-Pena. TheWrap, of course, has been talking about Climate Fiction (Cli-Fi) movies and novels since 2012 in several blog posts by this writer — and Darren Aronofsky‘s “Noah” fits nicely into the growing genre as well.

Perez-Pena, who is based in New York, flew out to Eugene, Oregon to get the story. He met with University of Oregon professor Stephanie LeMenager — and the graduate students in her pioneering class — and filed a report that appeared in both the print edition of the paper and online.

LeMenager teaches a class called “The Cultures of Climate Change.” It’s the first in the nation, even the world, to focus on the arts and climate change this way. As the Times notes, the goal of the seminar ”is not to marshal evidence for climate change as a human-caused crisis, or to measure its effects — the reality and severity of it are taken as given — but how to think about it, prepare for it and respond to it.”

The current Winter 2014 semester class focuses on ”films, poetry, photography, essays and a heavy dose of the mushrooming
subgenre of speculative fiction known as Cli-Fi. The class focuses on novels such as “Odds Against Tomorrow” by Nathaniel Rich, and “Solar,” by Ian McEwan.

Rich’s Cli-Fi novel recently appeared in paperback, after making a splash last year in April when NPR picked it for a series of specials on Cli-Fi novels.

“Speculative fiction allows a kind of scenario-imagining, not only about the unfolding crisis but also about adaptations and survival strategies,” Professor LeMenager told the Times. “The time isn’t to reflect on the end of the world, but on how to meet it. We want to apply our humanities skills pragmatically to this problem.”

According to LeMenager, her students at UO this semester tend to share her activist inclinations are enjoying the class — blogging and tweeting about it. With the Times article now online, the story has gone global and been translated into several languages already.

According to the Times, novels set against a backdrop of climate change are beginning to make their mark on the literary scene, including books such as “The Windup Girl,” by Paolo Bacigalupi; “Finitude,” by Hamish MacDonald; and “The Carbon Diaries 2015,” by Saci Lloyd. Well-known writers have joined the trend, the Times observed, mentioning both Barbara Kingsolver, with “Flight Behavior,” and Ian McEwan.

LeMenager says her seminar is open only to UO graduate students, with some working on degrees in environmental studies, others in English and one in geography. “It can have the rarefied feel of a literature seminar,” the Times said. “Fueled by readings from Susan Sontag and Jacques Derrida.”

Cli-fi novels and movies ”fit into a long tradition of speculative fiction that pictures the future after assorted catastrophes,” the Times reports. Nathaniel Rich, who lives in New Orleans and often writes for the Times Sunday magazine and its Op-Ed pages, told the Times: “You can argue that that is a dominant theme of post-war fiction, trying to grapple with the fragility of our existence, where the world can end at any time. It surprises me that even more writers aren’t engaging with it.”

So where does Cli-Fi come from? “The climate-change canon dates back at least as far as ‘The Drowned World’ written in 1962 by J. G. Ballard,” the Times reported. So this is nothing new. It’s just “mushrooming” now.

According to the Times, Cli-Fi novels have ”characters whose concerns extend well beyond the climate, some of it is set in a present or near future when disaster still seems remote, and it can be deeply satirical in tone.”

Have you read a Cli-Fi novel recently? Are you writing one?

When the mention of a rising literary genre makes it into the pages of the New York Times, you know something important is going on. This is one meme worth bookmarking and watching as it grows worldwide.