Rebecca Addelman has more proven that she can take on chaotic crime dramedies as a writer behind the excellent “Dead to Me.” But when it comes to “Guilty Party,” the new Paramount+ series she created starring Kate Beckinsale, she has totally fumbled the ball.

It’s not just that “Guilty Party” is bad (though it is). It’s entirely unfocused and Addelman and her writing team don’t seem to know what exactly they want the show to be. It starts off intriguing enough with a flawed protagonist named Beth Burgess (Beckinsale), a journalist who is accused of falsifying a quote in a story moments after receiving an award for it. She says she was framed. Her shady superior isn’t backing her up. It sets up an interesting drama about a woman, one who obviously has investigative abilities, determined to find out who did this to her and why. Then, to clear her name.

Except, “Guilty Party” isn’t that. Beth loses her job and falls into a personal and professional depression, taking on a pride-swallowing position as a writer at a publication where she reports to a millennial (Madeleine Arthur) more interested in Harry Potter memes than serious crime stories. While it gives way to a few humorous moments between the older and younger women, this is mostly empty fodder that could have been better spent establishing the more compelling narrative. 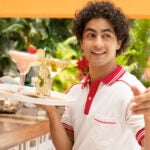 At this point in the series, Beth doesn’t know who might have set her up and strangely doesn’t seem to care, which is uncharacteristic of a woman who takes every chance to exasperatingly remind everyone that she is an upright reporter.

Beth’s home life is also unfulfilling to watch. “Guilty Party” aims to show how her relationship with her husband (Geoff Stults) is deteriorating due to her dissatisfaction with her work and his truly out-of-nowhere decision to have kids after they both decided they wouldn’t. The series alludes to Beth’s relationship with her mother that may be a factor in her stance against motherhood, but the series doesn’t dive into it in the first few episodes. And honestly, that’s not captivating enough for you to care either way.

With a title like “Guilty Party,” you’d think the writers would dive more quickly into a person or people responsible for some type of offense. Strangely, they take a meaningless detour from whatever really happened with Beth and her award-humiliating story into her interior life. But things begin to heat up when she’s handed the case of a woman, Toni Plimpton (Jules Latimer), who has been imprisoned for a murder she says she didn’t commit.

Of course, Amber (Arthur) isn’t initially interested. But Beth is already chasing the story like a dog with a bone, journalistic juices now revived.  But this once renowned reporter inexplicably goes into the case half-cocked. When she meets a terrified Toni behind bars, she proceeds like this is her first day on the job, misidentifying details about her case and slow to realize that this Black woman will require special attention in a legal system rigged against her. 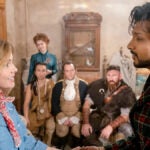 If this wildly out-of-character behavior is meant as a form of slapstick, it definitely doesn’t come across and is entirely misplaced. In fact, Beth has to plead with Toni to keep her on the case — partly because Toni is disgusted by her lack of preparedness and because Beth is frantic for a career comeback. It begs a question that Toni herself wonders: Does Beth really care about Toni’s case?

“Guilty Party” doesn’t really answer that in the first few episodes, which might be all the answer you need. Instead, we continue to follow Beth as she bumbles around trying to prove Toni didn’t murder her husband, head-butting a competing journalist on the case, and getting in way over her head with Colorado criminals quick to draw their weapons on a white woman in heels who clearly has no idea what she’s doing.

While a 30-minute dramatic series is often welcome, “Guilty Party” might have been better suited to a one-hour format that would allow Addelman and her team to flesh out the characters and their motivations as well as fine tune the tone. It’s totally nonsensical that an accomplished journalist would make the mistakes Beth does, and even act the same way she does. Meanwhile, a Black woman is facing life in prison.

What is the point of “Guilty Party” and the way in which the writers are choosing to tell the story? After watching the first three episodes, it’s unlikely audiences will care to find out.

For the record: A previous version of this review listed an incorrect name for Kate Beckinsale’s character.