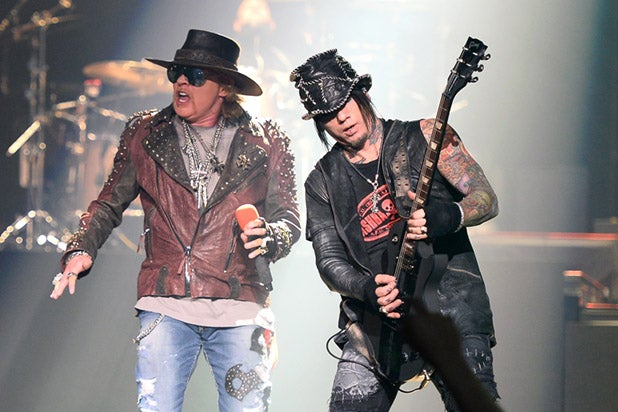 LAS VEGAS, NV - MAY 21: Singer Axl Rose (L) and guitarist Dj Ashba of Guns N' Roses perform at The Joint inside the Hard Rock Hotel & Casino during the opening night of the band's second residency, "Guns N' Roses - An Evening of Destruction. No Trickery!" on May 21, 2014 in Las Vegas, Nevada. (Photo by Ethan Miller/Getty Images)

Guns N’ Roses has grossed nearly $117 million dollars from its ongoing Not in This Lifetime… Tour. That’s obviously a lot of money, but TheWrap can add a bit more perspective for our readers.

That take means GnR’s $116.8 million haul has topped the next five (and damn near six) biggest tours combined — and they’re no small-fry artists, either. That is, unless you consider Bruce Springsteen and the E Street Band ($33.6 million), Barbra Streisand ($26.6 million), Celine Dion ($24.7 million), Kenny Chesney ($17.9 million) and Billy Joel ($8.9 million) to be small potatoes. We didn’t think so.

Guns N’ Roses’ North American tour kicked off on June 23 and wrapped on August 22, traveling through a total of 21 stadiums in the process. More than one million fans attended the 25 performances.

Next month, the GnR reunion tour heads to Latin America, with concerts booked in 11 cities during the fall. The group will travel to Asian and Australia early next year — so long as there’s not another breakup before then.

The run reunites Guns N’ Roses members Axl Rose, Slash and Duff McKagan, who, until now, hadn’t played a show together since 1993.