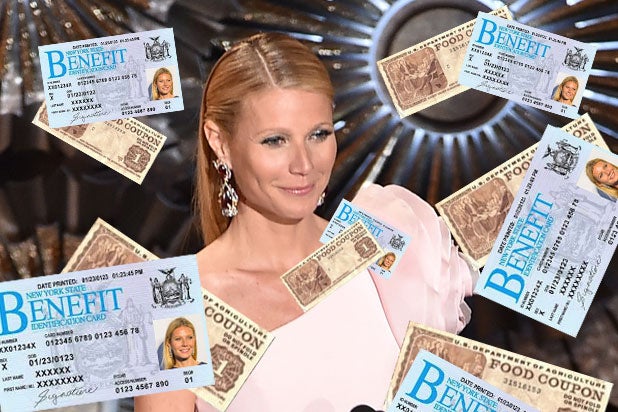 Gwyneth Paltrow just gave her many haters a big chunk of gristle to chew on.

The “Iron Man” actress — who was eaten alive last week on social media when she announced she had accepted a challenge to live on a $29 weekly food stamp budget — has now admitted that she didn’t complete the challenge. Not by a long shot.

Paltrow confessed in a post on her website Goop that she “only made it about four days” in the challenge, saying that she “personally broke” and chowed down on “some chicken and fresh vegetables” that weren’t accounted for in the budget.

Oh, and “in full transparency, half a bag of black licorice.”

Paltrow took the #FoodBankNYCChallenge, issued by the Food Bank for New York City and its board member chef Mario Batali, to bring attention to New York’s hunger crisis.

The actress tweeted a picture of the $29 in groceries that she had purchased — brown rice, black beans, peas, eggs, tortillas, cilantro, limes and fresh vegetables. The image drew heat from the Twitizens of the world, who ripped Paltrow for her food choices and accused her of staging an exploitative publicity stunt.

“Maybe instead of grandstanding about $29… you could help normal people and donate some of your millions to a food bank?” wrote one detractor.

“Trying to be one of the ppl, used her $29 food bank allowance to buy limes, cilantro & parsley,” another quipped. “Forgot the Patron, I guess.”

In fairness, Paltrow didn’t use actual food stamps or an Electronic Benefit Transfer (EBT) card to buy the food. Also in fairness, the actress said in the Goop post that, unsure of her ability to complete the challenge, she preemptively donated to the Food Bank.

The point of it was to show how difficult it is to live on the equivalent of $1.38 per meal — the average amount that needy families receive per person as part of the Supplemental Nutrition Assistance Program (SNAP) — which Paltrow proved.

The Oscar winner wrote that she “would give myself a C -” in the challenge.

Despite all the controversy, Paltrow appears to have been a godsend for the food bank. In a previous interview, Silvia Davi, chief marketing and communications officer for the charity, told TheWrap that they had hoped to use the challenge to “get some buzz out there.”

Thanks to Paltrow, that’s exactly what happened.