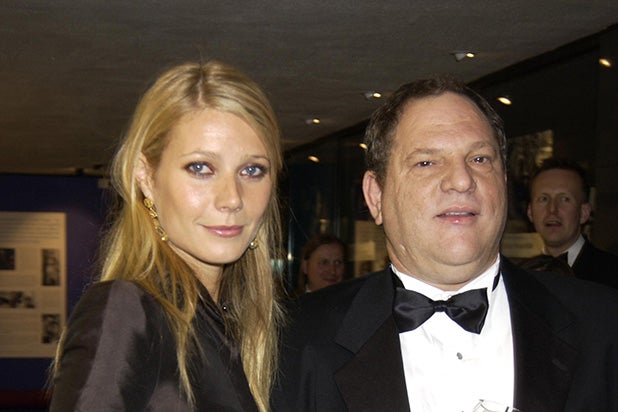 Gwyneth Paltrow has shared details of a now-famous confrontation between her ex, Brad Pitt, and producer Harvey Weinstein, which followed her account of an unwanted proposition from the mogul in the 1990s.

Appearing on “The Howard Stern Show,” Paltrow described her then-boyfriend’s reaction to Weinstein asking her for a massage in his hotel room. The actress said the incident occurred just as she signed on to star in the Miramax films “Emma” and the Oscar-winning “Shakespeare in Love.”

“If you ever make her feel uncomfortable again., I’ll kill you,” Pitt told Weinstein in 1995, on the opening night of a Broadway production of “Hamlet,” the actress said.

“It was the equivalent of throwing him against the wall, energetically,” Paltrow said. “He leveraged his fame and power to protect me at a time when I didn’t have fame or power yet … he’s the best.”

Paltrow also elaborated on her fears that refusing Weinstein’s advances would torpedo her career, as other actresses have said and even sued Weinstein over.

“It was out of the blue. I was blindsided,” Paltrow said of the incident. “I was shocked.”

[Weinstein] summoned her to his suite at the Peninsula Beverly Hills hotel for a work meeting that began uneventfully.

It ended with Mr. Weinstein placing his hands on her and suggesting they head to the bedroom for massages, she said.

“I was a kid, I was signed up, I was petrified,” she said in an interview, publicly disclosing that she was sexually harassed by the man who ignited her career and later helped her win an Academy Award.

he refused his advances, she said, and confided in Brad Pitt, her boyfriend at the time. Mr. Pitt confronted Mr. Weinstein, and soon after, the producer warned her not to tell anyone else about his come-on. “I thought he was going to fire me,” she said.