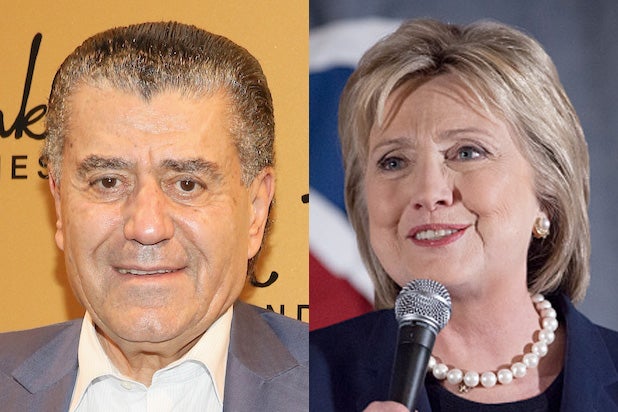 Haim Saban is a big honking Democratic donor — and he wants you to know it.

The billionaire and his wife, Cheryl, have given a stunning $6.4 million to Hillary Clinton’s presidential bid, according to federal records confirmed with Saban’s political advisers. The donations come not only to her official campaign but also to her super PAC and state Democratic Party committees that can support the former secretary of state’s efforts.

“It’s important to me for the [entertainment] industry to know what I’m doing for Hillary, how committed I am,” Saban told TheWrap.

“I want my number to be out there so others will be inspired to do the same,” he added.

Here’s how it breaks down:

That brought the Sabans’ total PAC donations in 2015 to $5 million.

That number has been widely reported. (Though recent reports of donor updates appear to have left out his wife’s December contribution.)

But there is an entire category that has so far been ignored in media reports, a slurry of soft money coming through a newly expanded pipeline — the state Democratic Party committees.

The Hillary Victory Fund is a joint fund created by the Clinton campaign, the DNC and 32 state parties. Donors are free to donate up to $10,000 to each state party, per person, per year. Although the money is ostensibly given to the state party, the money can legally be used by the national party for any legitimate purpose.

In this election, that provision is being used more aggressively than ever before. According to Saban’s political adviser, the mogul and his wife have maxed out to this fund in late 2015 and has already maxed out in 2016 — each giving $10,000 to each state party twice over.

That totals $6.4 million and change.

The $1.4 million to the Hillary Victory fund appears in an obscure place on the FEC site, not readily visible with other PAC donations (image for 2015 donations above).

A look at the top 10 entertainment industry political donors in 2013 — and how much they've given.