Nonetheless, Moonves and the king of the music scene, Calvin Harris, came together to go gaming on Thursday night, celebrating the launch of “Fallout 4” with a massive, secret-until-the-last-moment party in downtown Los Angeles 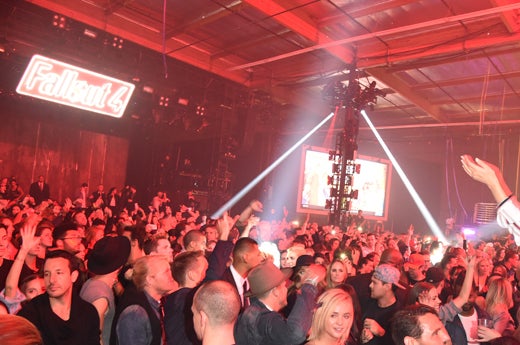 The scene inside the “Fallout 4” bash. (Jason Merritt/Getty Images for Bethesda)

Halle Berry, Chrissy Teigen, Kaley Cuoco and Wonder Woman icon Lynda Carter were amongst the guests that came to see Harris spin, and celebrate the upcoming arrival of the next game in a franchise that delivers on a Linklater schedule. The first “Fallout” was released in 1988, “Fallout 3” arrived a week before Barack Obama beat John McCain in the presidential election in 2008. 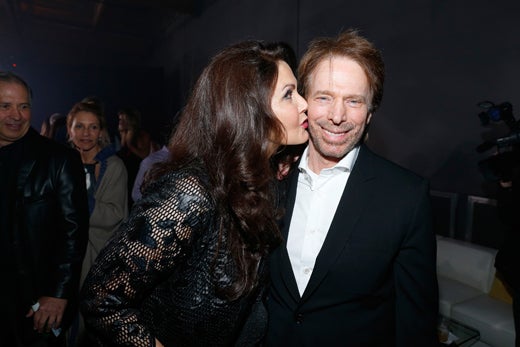 Forbes estimates that is released this coming Tuesday (Nov. 10), that it will haul in somewhere between $839 million and $959 million, based on unit sales of 14-16 million and a $59.99 price tag. That would place it in the top 10 of worldwide theatrical box office grosses for the year.

The bottom line: They could afford Calvin Harris. 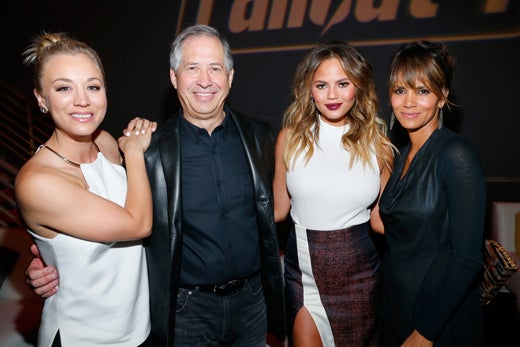 Organizers finally released the secret address for the event the night before, and even warned veteran scenesters to arrive by 8:15 p.m. or risk chilling outside — literally, as it was in the mid 50’s in downtown L.A. on Thursday night. The address was not the only thing embargoed.

“Fallout” producer Bethesda Softworks put an embargo on the gaming press’ reviews, meaning media could not even announce to their audiences when their already embargoed reviews would go live until Friday morning at 10 a.m. PT, per Gawker media gaming site Kotaku. 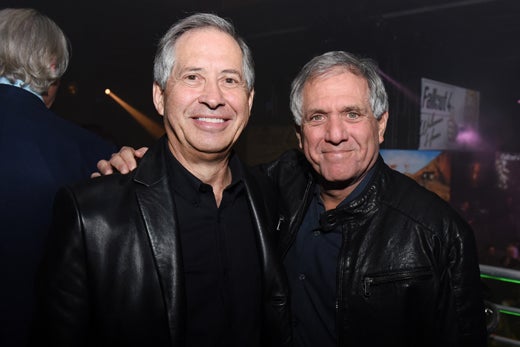 So where does Moonves fit in to this? Bethesda (who also produce “Skyrim”) is a division of Zenimax. When Robert Altman (not the film director) bought the company, he reached back to traditional media figures, filling a board that includes Moonves, Jerry Bruckheimer, entertainment attorney Ernest Del and baseball star Cal Ripken Jr.

This group is not shy about big bashes. At the Indianapolis Super Bowl in 2012, this party columnist had a neighboring table to this team (Moonves, Bruckheimer, Ripken) at Maxim’s party late on the night before the big game, and that midwest Super Bowl was not even aired on Moonves’ CBS. 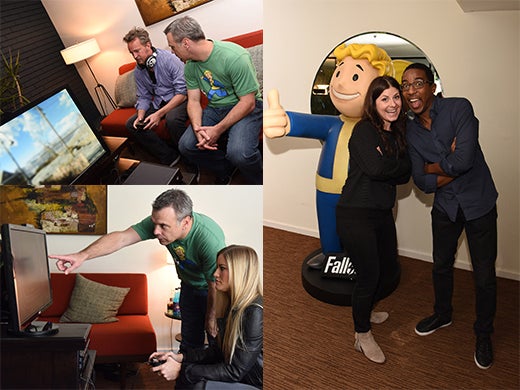 Bethesda figured out that getting high profile people to pay attention to a video game is not best in a noisy party. They smartly set up a preview suite at the Chateau earlier this week. Matthew Perry and iJusine came by. At right, Bethesda’s Erin Losi and BWR’s Steve Wilson. (Getty Images)

Steve Wilson and BWR, Ashlee Margolis’ A-List crew, and Zen Freeman were also on hand to hear Harris spin hits like “Eat, Sleep, Rave, Repeat,” “Outside,” “We Found Love”, “Blame,” and “How Deep is Your Love”.

This big cannon game party could represent an evolution from the time when phone companies were the ones who spent six or seven figures to reach Hollywood influencers in the heady 2000’s — such as when Blackberry would pop up with Drake on Wilshire Boulevard and give every guest a brand new Blackberry, or T-Mobile would take over Bryant Park for Shakira. While gaming is deep-pocketed, don’t rule out the days of Brent Bolthouse and Pantera Sarah phone bashes just yet. It’s a big entertainment marketing swing that’s not dead. 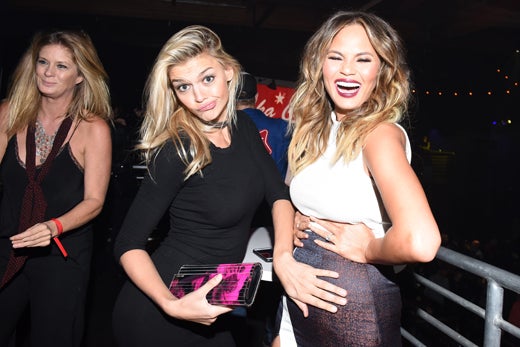 Put These Guys Down for $31 Million 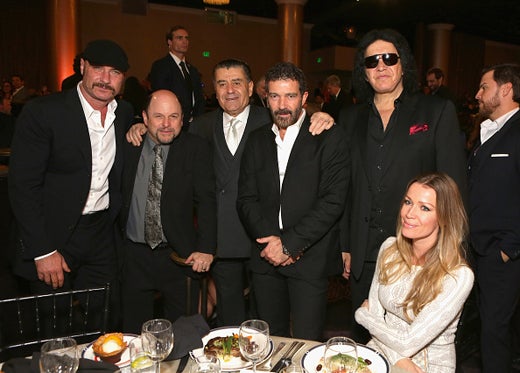 In fundraising sabremetrics, the Friends of the Israeli Defense Forces played “Moneyball” at the Beverly Hilton Hotel on Thursday night and threw a perfect game.

They raised an average of $25,800 per attendee to bring in $31 million over one night for the philanthropy started by Holocaust survivors.

On the proverbial mound: Haim Saban, who has led the charge for the FIDF. The media mogul and wife, Cheryl, tossed in $5 million themselves, Guess founders Maurice and Paul Marciano anted up with $2.5 million and a rabbi who promotes a fellowship between Christians and Jews (Yechiel Eckstein) topped all with $8.4 million, before David Foster and the Beach Boys played. 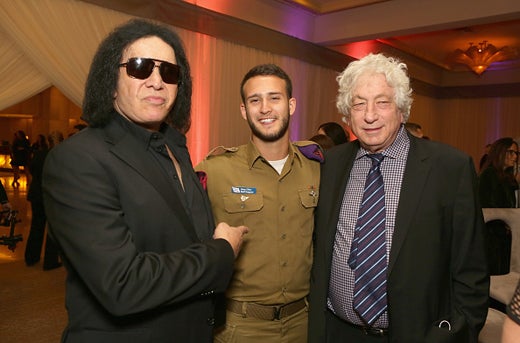 “The mission of FIDF — providing wellbeing and educational programs to IDF soldiers — is invaluable to us as a society that cares for its younger generation and recognizes the soldiers’ sacrifices,” Casey and Laura Wasserman said.

Sports and talent agent Wasserman (who contributed $2.1 million) is currently busy not just with his stable of top tier NBA players kicking off the season, but another international mission: Chairing L.A.’s bid to host the 2024 Olympics.

Robert Evans Does Not Stay in the Picture 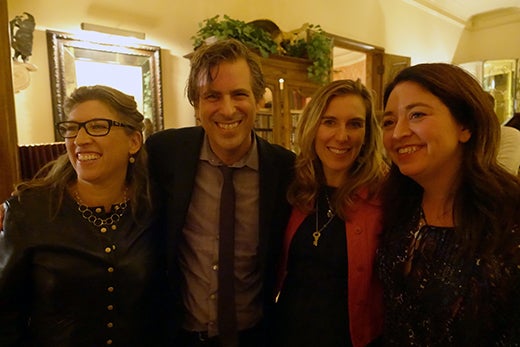 In between the Hilton and downtown at Robert Evans‘ Woodland Estate in Beverly Hills, documentarians huddled to celebrate Brett Morgen and “Montage of Heck” on Thursday night. The intimate crowd of 25 was dense with doc A-listers: Lauren Greenfield (“Queen of Versailles”), Morgen, Amy Berg (upcoming Janis Joplin doc “Janis”) and Liz Garbus (“Nina Simone”) (above).

In a scene from a movie, Evans had to leave town on short notice, but left a warm welcome note behind in front of a burning fireplace, with plates of cigarettes and an antique revolver on the coffee table. 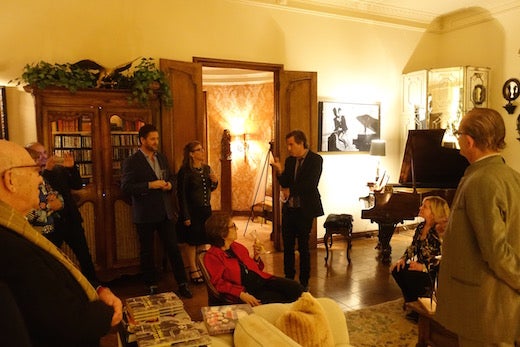 Amidst this setting and pictures with Evans’ pals like Michael Jackson, Jack Nicholson, Brett Ratner and fellow Paramount studio chiefs like Sumner Redstone and Brad Grey, Morgen surveyed the crowd. “It’s nice to see so many other documentarians here … campaigning for their own films,” he deadpanned. Kirby Dick and Abigail Disney (“Armor of Light”) were also on scene.