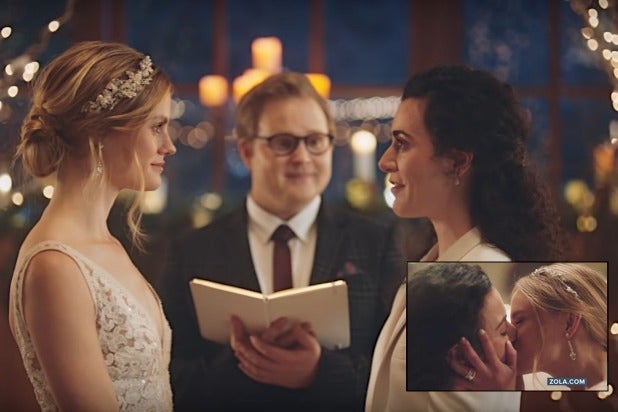 The wedding planning website Zola said Saturday it will pull all of its advertising from the Hallmark Channel “for the foreseeable future” after the network told the company it would no longer air four of six its commercials that feature a lesbian couple celebrating their nuptials with a kiss.

Hallmark made the decision to pull the ads, which were first seen on the channel on Dec. 2, after a conservative group called for a boycott of the network.

“We stand behind this commercial 150%,” a representative for Zola said in a statement. “We want all couples to feel welcomed and celebrated and we will always feature all kinds of love in our marketing.”

Also Read: Delta to Restore Same-Sex Love Scenes to 'Booksmart' And 'Rocketman' On Its Flights

“The only difference between the commercials that were flagged and the ones that were approved was that the commercials that did not meet Hallmark’s standards included a lesbian couple kissing,” Mike Chi, the chief marketing officer of Zola, said. “Hallmark approved a commercial where a heterosexual couple kissed. All kisses, couples and marriages are equal celebrations of love and we will no longer be advertising on Hallmark.”

A spokesperson for Hallmark told The New York Times the two women’s “public displays of affection” in the ad violates the channel’s policies. An account representative at Hallmark’s parent company, Crown Media, also told the Times that the channel did not accept ads “that are deemed controversial.”

The idea behind the series of commercials is that various configurations of couples wonder what their wedding would have been like if it had been planned through the custom wedding website Zola. One of the ads features a lesbian couple.

The conservative group One Million Moms said that it had spoken with Crown Media Family Networks CEO Bill Abbott to confirm the ads featuring a same-sex couple were pulled from the network.

“He reported the advertisement aired in error, but he was informed about it after hearing from concerned 1MM supporters. Way to go,” One Million Moms wrote on its website. “The call to our office gave us the opportunity to also confirm the Hallmark Channel will continue to be a safe and family friendly network. Praise the Lord!”

One Million Moms is a division of the American Family Association whose mission is to “stop the exploitation of our children, especially by the entertainment media.” Despite its name, the group has just 4,000 followers on its Twitter account.

“The debate surrounding these commercials on all sides was distracting from the purpose of our network, which is to provide entertainment value,” a Hallmark spokesman said in a Friday statement.

GLAAD on Saturday issued a statement condemning the decision by Hallmark to pull the LGBTQ-friendly ads.

“The Hallmark Channel’s decision to remove LGBTQ families in such a blatant way is discriminatory and especially hypocritical coming from a network that claims to present family programming and also recently stated they are ‘open’ to LGBTQ holiday movies,” Sarah Kate Ellis, president and CEO of GLAAD, said in a statement. “As so many other TV and cable networks showcase, LGBTQ families are part of family programming. Advertisers on The Hallmark Channel should see this news and question whether they want to be associated with a network that chooses to bow to fringe anti-LGBTQ activist groups, which solely exist to harm LGBTQ families.”

Hallmark Channel is rolling out a total of 40 original holiday-themed movies across Hallmark and its sister network Hallmark Movies & Mysteries — not one of which features an LGBTQ character taking center stage.

Watch the Zola ad, which is still airing on other networks and is available on YouTube, below:

Decade in Review: “Pain and Glory,” “Carol” and “How to Survive a Plague” rank among the highlights of the decade