Matt Hutchins, the husband of slain cinematographer Halyna Hutchins, opened up a little Friday night about his wife’s accidental death on the set of “Rust,” saying that their “loss is enormous.”

Accompanied by a photo of Hutchins and her 9-year-old son Andros, he wrote on Twitter: “Halyna inspired us all with her passion and vision, and her legacy is too meaningful to encapsulate in words. Our loss is enormous, and we ask that the media please respect my family’s privacy as we process our grief. We thank everyone for sharing images and stories of her life.”

Hutchins also shared photos on Instagram of his family in happy times with a caption that reads, “We miss you Halyna!”

In a follow-up tweet, Hutchins asked that anyone looking for ways to memorialize the cinematographer donate to a fund created by the American Film Institute in her honor. The Halyna Hutchins Scholarship Fund will provide scholarships for female cinematographers pursuing a career in film. Hutchins’ friend and fellow AFI graduate Olia Oparina announced the fund in a statement, which partly reads:

Throughout her career, she was an advocate for female DP’s and directors, familiar with the struggles women face in the entertainment industry.

After overcoming many hurdles, Halyna began to get offers on big-budget films like “Archenemy” and “Blindfire”, features she was proud to lend her vision to.

Her passing is a tragedy, not only for her family and friends, but also for the world of film she so loved, which has been forever deprived of her great talent.

Though details about the fund have not been made public, the statement directs readers on how to make a donation: If you would like to support the cause, feel free to send a check to AFI with her name in the memo. Alternatively, you can also donate online through AFI website but you have to put in a memo “Halyna Hutchins Scholarship Fund.”

Hutchins was the director of photography on 32 projects, most recently “Rust,” the independent Western starring and produced by Alec Baldwin. The 42-year-old died on an Albuquerque, New Mexico, set after Baldwin fired a prop gun that struck Hutchins and the film’s director, Joel Souza. The incident remains under investigation. 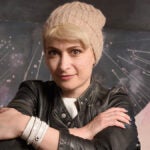 Also Read:
Who Was Halyna Hutchins, the ‘Rockstar Cinematographer’ Killed at 43 by a Prop Gun on ‘Rust’ Set?
x